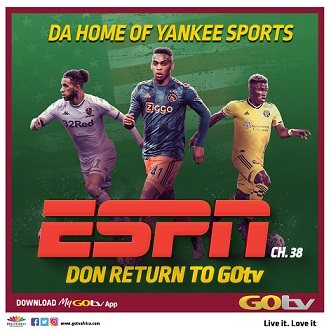 First to air LIVE on your screen is the Scottish Premiership clash between St. Johnstone and Aberdeen, which airs at 12:25pm. Followed by the pre-season friendly: Ajax vs RKC Waalwijk at 5:40pm. Catch both matches this Saturday, 8th August.

On Sunday, 9th August, we see the pre-season Dutch friendly action as Feyenoord goes against Sparta Rotterdam, which airs at 1:30pm. Later that day, we witness a top-flight Scottish action as champions Celtic faces Kilmarnock at 4:14pm.

The excitment does not end this weekend. Next week Tuesday, 11th August, we see more of the Scottish Premiership with Dundee United and Hibernian, which will air at 5:55pm, while St. Mirren vs Celtic will hold on Wednesday, 12th August at 5:55pm.

To wrap up the final live football match prior to next weekend is the pre-season friendly between Ajax and FC Utrecht on Thursday, 13th August at 5:40PM, with both teams counting down the days to the start of the Eredivisie season on Saturday, 12th September.

Visit ESPN for broadcast details and follow @ESPNAfrica for updates.

Reconnect now on the GOtv Max package to have access to content on the ESPN channel and other quality programming on channels such as SuperSport Select 4 & 5, BET, M-Net Movie Zone, Discovery ID, Cartoon Network and so much more for the price of N3,280! You can make use of the MyGOtv app from the comfort of your homes to upgrade or reconnect.

Kindly Share This Story:— SAYS CHAPTERS ARE NOT FIEFDOM OF ANY GODFATHER   The Association…