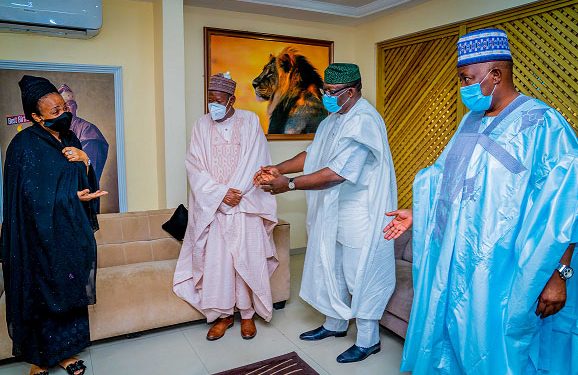 Ajimobi, former Oyo State governor, died of COVID-19 complications at a private hospital in Lagos last Thursday. He was buried privately on Sunday morning in his Oluyole, Ibadan home amid sobs by children and relations.  His remains were interred at about 10am after the Chief Imam of Ibadan land, Sheik Ajigbotomokekere, led prayers for the repose of the deceased’s soul.

A public prayer session was later held at the Abiola Ajimobi Mosque, Oke-Ado where a renowned Islamic preacher, Alhaji Muyideen Bello, led other priests to give a brief sermon.

He extolled the virtues of the late ex-governor, stressing that despite the demands of his governorship position, he served God and supported Islam.

Bello said: “Ajimobi lived well. He promoted Islam. In fact, I pray God to help the living to also live well like him. When he became the governor, we argued over the mosque located behind his office. We told him that government does not usually fulfil its promises on mosques.  Then he said he wished to build a mosque. Thank God we are in that mosque, which he built today.”  He said Ajimobi’s exploits and his death had already presented a lengthy sermon for the living.

The cleric recalled one of his last interactions with Ajimobi when he invited him to chair an Islamic lecture in his capacity as Abiola Ajimobi, not as a politician or former governor.

“When I asked him to address the audience that day, what he said was instructive. He said he desired long life because his father died shortly before age 70. He added that although long life was desirable, once one was blessed with the ability to achieve one’s dreams in life, it was a thing of joy. He expressed his desire to live till age 90.

“This death that every human runs away from, a day is coming when we shall all encounter it where we cannot escape. What are we going to be remembered for?”

Obasa told reporters that Ajimobi’s ties with Lagos political community were strong, having proved to be a loyal party man.

He said: “He was a loyalist who never forgot his benefactor. This is why Lagos political family will continue to identify with his family and his legacies. The kind of development he introduced in Oyo State fetched him the sobriquet ‘Koseleri.’ He served the party wholeheartedly. That was why he was nominated and supported as the Deputy National Chairman (South) and Acting National Chairman of our party.”

Kindly Share This Story: THE Chairman, Committee on Information and Strategy of the Lagos State…