Despite challenges facing telecoms industry over the years, according to the operational records released by the sector regulator recently, the industry has recorded impressive growth, which pointing to the effective regulatory environment created by the Commission. Today, telecoms contribution to gross domestic product (GDP) increased from 8.50 percent in August 2015 to 11.39 percent as at October, 2019. 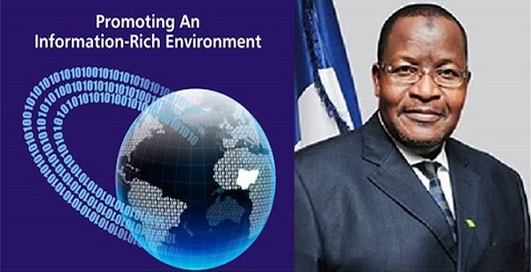 Danbatta’s job as the umpire of the telecoms industry was affirmed for a five-year tenure in the first instance, as stipulated in the Nigerian Communications Act (NCA), 2003. It is evident, four years and few months into his five-year term, Danbatta has openly demonstrated about his competence as a regulator per excellence, having continued to provide the right and leadership at NCC.

From that August 2015 till date, according to the records, the industry has recorded impressive growth statistics, pointing to the effective regulatory environment created by the Commission to the strategic implementation of its 8-Point Agenda through the Commission as articulated by the Professor Umar Garba Danbatta, as the Executive Vice Chairman/CEO of the Commission that four years ago, the foreign direct investment (FDI) and local investment profile in the telecoms sector stood at $38 billion. But today, investment in the sector has grown significantly to over $70 billion. The Commission also continues to strengthen commitment towards pursue relevant policies to encourage more investment into the industry.

Speaking at the maiden Nigerian Telecom Leadership Summit (NTLS) held in Lagos in 2019, Danbatta, had noted that “the volume of telecom investment in Nigeria is very impressive and indicative of a very fast-growing and resilient sector of the economy. But, we will continue to advocate for more investment, given that the industry is very capital intensive, with the competition for FDI becoming fiercer among different nations.” Today, the Commission estimates that about 40 million Nigerians – especially those in the rural and semi-urban areas- are yet to be reached with basic telecom infrastructure and services.

According to Danbatta, “the argument for more investments becomes more compelling, given that this industry is very capital intensive, with the competition for Foreign Direct Investments (FDls), becoming fiercer among different nations. In our consultative regulatory process, we consider shared experiences, and shared vision as the best approach to equip us with the tools to continuously reposition towards the course of effective regulation.”

He stated further that, as the 4th Industrial Revolution blurs the lines between the physical, biological and digital boundaries, the industry will continue to witness challenges of investments to match growth and technology evolution dynamics. In this age, broadband is of critical importance with its potential to improve the economy of many nations.

“We may all be aware of the empirical study by the World Bank, which suggests that for every 10 per cent growth in Broadband penetration results in 1.34 per cent in Gross Domestic Product (GDP) in developing countries. This is one of the reasons why we have developed the regulatory and licensing framework to accelerate broadband availability, accessibility and affordability,” Danbatta stated at the NTLS in Lagos.