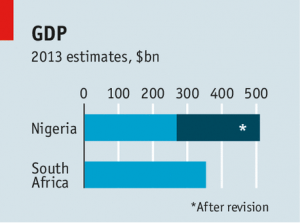 This contains in the last week Nigeria economic projection for 2017 outlook statement released which the expert also expected that the economy to exit its current recession by Q3 2017 while expect interest rate to reduce to between 11%-12% from the current 14% also expected exchange to settle between N315 and N320 to the dollar at the official market rate. We expect to see a harmonized exchange rate in 2017, the statement noted.

According to its statement made last week the GTI research expectation is more focused on stability than reduction because of the backlog of dollar demand which will still put some pressure on exchange rate despite the expected improved reserves at least in the short to medium term.

The researcher urged the Nigerian central bank management team to focus on the shifting MPC from fighting inflation to economic growth. The rational thinking is that the refocus of the MPC to economic growth from inflation will see inflation advance to higher than the current 18.5%.

According to the researcher; “our forecast is premised on the assumption that the CBN will strive for a harmonized exchange rate in 2017, which we believe will settle between N315 and N320. Our assumption is that most of the people who bid for the dollar at the current official rate of N305, 898 end up not getting it at that rate or at best not getting as much as they bided for to finance their importation and resort to sourcing the deficit at the more expensive parallel market rate. Also, the list of 41 banned from accessing the official window also gives impetus to our submission that the current level of inflation reflects the exchange rate at N485 and not at the current official rate of N305.

Based on that, we expect inflation to trend downwards towards 16% despite our projected rate reduction. It is our opinion that a harmonized exchange rate at N320 will actually be a discount considering the movement from N485 and supported by improved dollar supply.

We expect the ALSI to close the year positively by 7.5% in 2017 driven by fresh listings and improved FPI participation. We also project that 2017 will be a year of recovery for a lot of listed companies which will impact their performance.”