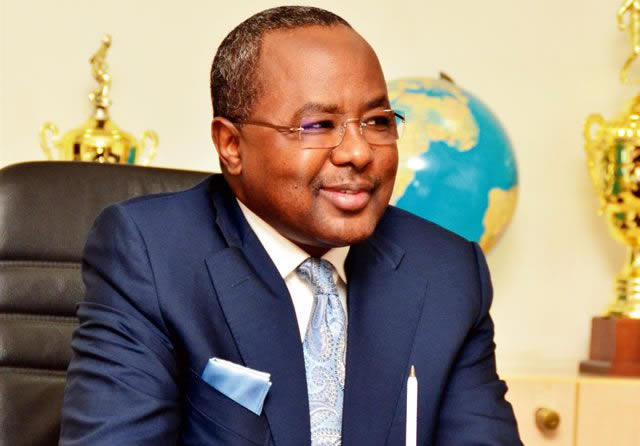 Suspended Director General of Securities and Exchange Commission (SEC) Mounir Gwarzo reportedly awarded contracts to a company in which he is a director to the tune of N33m while in office.

According to a report, these and others were contained in the report of the Administrative Panel of Inquiry into allegations of violations of public service Rules, Financial Regulations and other Extant Rules and Regulations set up by Minster of Finance to investigate the allegations and come up with recommendations.

The Terms of Reference of the Panel include investigating allegations against Gwarzo he was a director in Medusa Limited and Outbound Investment Limited while still serving as SEC DG and also used his influence to award contracts to those companies.

On the allegation of Gwarzo’s directorship in Medusa Limited while still serving as DG, the report stated inquiry made and documents obtained by the panel at the Corporate Affairs Commission revealed that Gwarzo was still a director of the company as well as a major shareholder with a shareholding of N1.2m as at the time of the search.

“His purported letter of resignation dates 19th December 2012 was not part of CAC’s records as at the date of the inquiry l.

“It was equally discovered from the account opening mandate obtained from GTBank that Gwarzo was at the date of the inquiry signatory to account No 322324264/1/110 maintained by the company with the bank.

“The panel was also furnished with a letter dated 24th July, 2015, addressed to the bank signed by Gwarzo as director of the company requesting for a change of account Officer on the basis of a resolution passed and signed by the directors of the company to that effect,” the report stated.

The report also discovered a letter dated 16th August, 2016 signed by Gwarzo as a director of the company requesting for the issuance of a credit card in relation to the said account.

It added: “When Gwarzo was confronted with the above letters, he admitted to have authored and signed them but claimed that it was a regrettable action.

On Outbound Investments Limited, which benefitted in contacts awarded by SEC to the tune of N33, 736,596, in which Gwarzo is a director and shareholder, he claimed the company belongs to his wife’s family and stated that he was only representing his wife on the Board.

Based on revelations, the panel stated that Gwarzo’s status as director in both Medusa Investment Limited and Outbound Investment Limited while in post as Director General of SEC has raised and established a fundamental issue of conflict of interest against him.

Given his directorship in both companies, the panel opined that Gwarzo was in breach of PSR 030424 and PSR 030402 (divided loyalty, which is classified as an act of serious misconduct).

The panel also opined that being a shareholder of Outbound Investment Limited, Gwarzo used his position as DG to influence the award of contracts to the company which amounts to conflict of interest.

Based on the gravity of the findings by the Panel, it was recommended that Gwarzo be dismissed from the Public Service of the Federal Government for holding the position of a Director in private companies while in service as the DG of SEC in breach of PSR 030424 and Section 6 of the Investment and Securities Act 2007.

The panel also recommended that Gwarzo be referred to the ICPC for further investigation of the allegation of using his position as DG to influence the award of contracts to Outbound Investment Limited in view of the Provisions of Sections 58 (12) (b) and 58 (5) of the Public Procurement Act 2007.