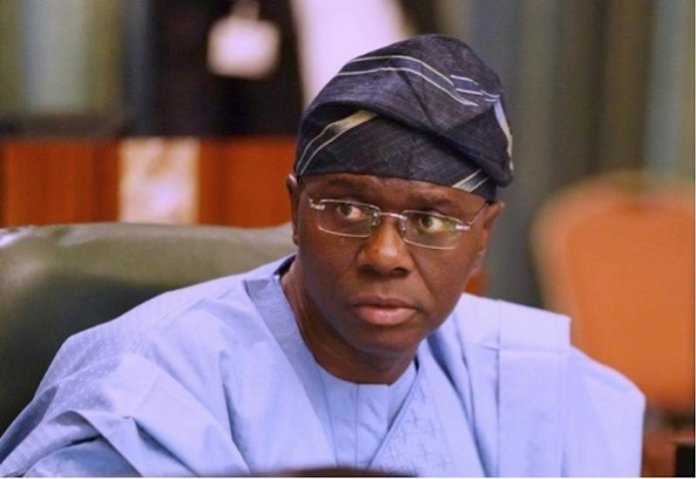 Despite the 24-hour curfew imposed by the Lagos State Governor, Mr. Babajide-Sanwo-Olu, to curb the spread of violence arising from the #EndSARS protests, hoodlums still took over the state yesterday, unleashing mayhem, and burning public and private assets.

Sanwo-Olu, however, apologised for the action of the soldiers that fatally dispersed Lekki protesters on Tuesday, clarifying that no state governor in the country controls the rules of engagement of the military, blaming forces beyond his control for the violent crackdown.

Following the increasing violence in their states, Governors Dave Umahi of Ebonyi State, Nyesom Wike of Rivers State, and Ifeanyi Ugwuanyi of Enugu State imposed a curfew to curb the spread of mayhem unleashed by hoodlums.

As hoodlums took over Lagos yesterday, some of the facilities affected include the Nigerian Ports Authority (NPA) headquarters in, which was set ablaze; Sanwo-Olu’s family home; BRT terminals at Oyingbo and Berger; Lagos Television (LTV); Television Continental (TVC); and The Nation Newspapers.

THISDAY gathered that NPA workers escaped death as part of the building was set ablaze by the hoodlums.

The fire torched over five floors of the nine-storey building, invaded by hoodlums numbering over 50.

However, there was no official statement from the agency as all efforts to speak with the General Manager, Corporate Communications, Mr. Adams Jatto, proved abortive.

Confirming the attack on The Nation Newspaper, the Editor of the paper, Mr. Adeniyi Adesina, said in a statement last night that armed men on motorcycles invaded the headquarters of the paper on Fatai Atere Way, Matori in Lagos yesterday afternoon.

He said: “In a commando-like manner, they kicked their way into the premises after scaring away the security men on duty, brandishing their sophisticated guns.

“They poured petrol on the frontage of the building and set fire to it.

“Some of the vehicles parked within the premises were also set ablaze.

“Hundreds of boys that followed the men on motorbike swooped on the office and looted everything they could lay their hands on.

“These include desktop computers, laptops, air conditioners and other office equipment.”

Adesina further disclosed that at the time of the attack, the Managing Director and Editor-in-Chief Mr. Victor Ifijeh, was among those trapped within the office while the fire raged on.

He added that they were, however, evacuated when men of Operation MESA security outfit arrived.
He described the incident as a targeted attack on the free press.

“The Nation had been listed on Twitter and other social media platforms, being promoted by sympathisers of the ongoing destructive activities, as a target of attack.

“The Nation has robustly reported the protests fairly, giving voice to the agitation of youths for a better Nigeria.

“The management is at a loss as to why the company should be a target of such an unwarranted attack,” he said.

The hoodlums, who claimed to be enraged by the attack on protesters at the Lekki Tollgate, also went on a rampage to burn residential houses of perceived enemies, police divisions and outposts, hospitality centres, emergency and safety offices and equipment.

In the fray, so many fatalities and casualties were recorded on the civilian and police side, as well as journalists who were attacked by the mob.

In Surulere, the family house of Sanwo-Olu was reportedly set ablaze by an irate crowd while the palace of the Oba of Lagos, Oba Rilwanu Akiolu, at Iga Idugaran on the Island, was vandalised by youths in the area.

Although they couldn’t gain access to the monarch, they vandalised his palace and made away with his staff of office.

It took the intervention of the military to douse the situation in the palace and regain control.

The angry mob set ablaze facilities in Jakande, Lekki, while a Shoprite Mall in Sangotedo was looted.

The irate youths also stormed Television Continental (TVC) and set it ablaze with the staff on duty.

Again, it took concerted efforts from the deployment of anti-riot policemen before the staff could escape to safety.

Reporters attached to African Independent Television (AIT) and Silverbird Television were harassed by the mob, who accused them of spying on their activities.

Emergency and safety services were not left out in the attacks as the offices of the Vehicle Inspection Service (VIS) and Federal Road Safety Corps (FRSC) at Ojodu were razed including their vehicles.

The Lagos State Emergency Management Agency (LASEMA) also had one of their paramedic interns hit by a bullet while on duty.

Reacting to claims that they refused to help injured Lagos residents, the DG/CEO LASEMA, Dr. Olufemi Oke-Osanyintolu, said their personnel and vehicles have been under attack and harassment since the protests started and they have struggled to maintain a presence while still keeping their personnel safe.

Reacting to Tuesday incident at the Lekki Tollgate, Sanwo-Olu lamented that the #EndSARS protests in Lagos had been hijacked by criminal elements.

He subsequently extended the curfew by additional 24 hours even as he directed that flags in public buildings in Lagos should fly at half-mast in solidarity with the victims of the protests.

In a statewide broadcast to the people of the state, Sanwo-Olu said that situation took a new turn when criminal elements took over.

He cited several cases of mayhem unleashed by hoodlums.

On the action of the soldiers, he said: “For clarity, it is imperative to explain that no sitting governor controls the rules of engagement of the army.”

He said he had nevertheless instructed an investigation into the ordered and the adopted rules of engagement employed by the officers and men of the Nigerian Army deployed in the Lekki Tollgate yesterday.

“I apologise for everything that happened,” Sanwo-Olu said in an effort to assuage the anger in the state.

Violence Worsens in Ebonyi, Edo, Kano, Others In Kano, schools were yesterday closed and business activities brought to a halt at the Sabon-Gari market over the fear of hoodlums’ attack.

Schools on the axis were also closed yesterday to prevent any attack by the hoodlums.