Managing Director/Chief Executive (MD/CE) of the Nigeria Deposit Insurance Corporation (NDIC), Umaru Ibrahim has successfully defended the Corporation’sproposed 2017 budget before the House Committee on Insurance and Actuarial Matters as part of its oversight function.

The MD/CE began by calling the attention of the Honourable members to the delay in the approval of 2016 budget which contributed to the modest execution of the budget. He restated the Corporations commitment to performance based budgeting system (PBBS) the essence of which is was to ensure efficient allocation of resources to enable the Corporation achieve its strategic mandate. 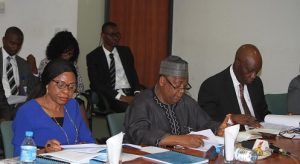 In his presentation, Ibrahim stated that in 2016, the Corporations actual income (net of provisions) was N85.020 billion which was expendable to the limit of 75% in line with the provisions of Fiscal Responsibility Act (FRA) 2007 while its total expenses was N31.551billion. This gave a net operating surplus of N53.469billionout of which the Corporation made provision to transfer the sum of N42.775billion or 80% into Consolidated Revenue Fund (CRF). As at date (Feb 2017), the Corporation had made a total transfer of N35.893billion into CRF while awaiting the conclusion of its 2016 External Audit report before transferring the outstanding balance of N6.882billion to the CRF in line withFRA 2007. With this the Corporation had surpassed its budgeted sum of N35.893billion as against theactual sum of N42.775billion transferred into CRF.

He urged the House Committee to approve the Corporation’s 2017 proposed budget of total income of N102.294 billion and expendable income of N76.720 billion. This comprised Operating expenses of N43.227 billion or 49.94%of total expenditure and a total Capital expenditure is N43.323 billion or 50.06% of the total budget. The Capital expenditure would be funded by the Corporation’s General Reserve Fund which stood at N45.670 billion as at 31st December, 2016. He concluded that a total ofN47.254billion is proposed as 80% net Operating surplus to be transferred into CRF in 2017.

Members of the Committee expressed their satisfaction with the level of execution of the Corporation’s 2016 Budget and its proposed 2017 Budget especially its commendable efforts by consistently contributing to the Consolidated Revenue Fund of the Federation and urged the Corporation to remain steadfast.

In the course of general discussion on the banking system, the members of the Committee expressed grave concern over the increasing wave of non-performing loans (NPLs)particularly delinquent insider related facilities in various banks and its consequences on the stability of the nation’s banking system. The members demanded for an update on the state of the Nigerian banking system.

NDIC Boss stressed that while the banking industry indicated strong fundamentals in regulatory assessment and rating, regulators were concerned about the rising tide of NPLs in thebanking system. He informed the Honourable members that as at December 2016, the 25 Deposit Money Banks (DMBs)had total loans portfolio ofN18.53 trillion out of which N1.85 trillion or 10% were NPLs where N740 billion or 40% constituted Insider/Directorsrelated loans. This was far above regulatory threshold of 5% for the DMBs.

In other banking subsectors like the microfinance banks, (MFBs), he noted that there were 978 MFBs in existence as at December, 2016 with total deposits liabilities of N158 billion and total loans and advances amounting to N195 billion out of which N87.75 billion or 45% were NPLs where N68.25 billion or 35% constituted Insider related/Directors loans.  The NPLs indicated aclassic case of over-lending, accumulated interests’ chargesand poor corporate governance.

Similarly, by extension, the existing 42 primary mortgage banks (PMBs) had total deposits liabilities of N69 billion but  with total loans portfolio of N94 billion, which indicated another case of over-lending, accumulated interests, poor corporate governance and high ratio of NPLs which stood atN51.7 billionor 55% out of which N42.3 billion or 45% were Insider related/Directors loans. The resultant effects of thesenegative trend would be poor earnings and erosion of shareholders fund.

The managing director observed that this development had posed serious issues bordering on corporate governance which were capable of eroding public confidence in the banking system. He advocated for strictcompliancewith the existing code of ethics for bank directors and a review of the existing laws and regulations to proffer stiffersanctions for Directors who exploit their positions and default in the payment of their credit facilities while still occupying Directorship positions in the banks.

In response to the proposed budget, the Chairman of the Committee, Hon. Femi Fakeye, commended the Corporation on its performance in the 2016 budget where the NDIC stood out amongst its peers especially its transfer of huge sums into Consolidated Revenue Fund (CRF). He urged the Management not to rest on its oars and strive to achieve greater heights.

The House Committee Chairman went down memory lane to recall the 2008/2009 banking crisis. He requested the Corporation and other regulatory authorities to come with ideas and advise the Honourable members on theways of salvaging the financial situation.

Towards this end, Fakeye, called on the Corporation to bring forth credible proposals for the amendment of the NDIC Act, BOFIA as well as other banking related laws that would enable the Corporation to achieve greater performance in order to engender public confidence in the banking sector and ultimately guaranty financial system stability.