There were drama and intrigues on Thursday as 17 members of the Edo State House of Assembly removed Speaker Francis Okiye and his Deputy Roland Asoro.

The removal of the loyalists of Governor Godwin Obaseki, is a culmination of more than one year of bitter power-play which began with the inauguration of only 10 of the 24- members-elect in the night of June 17, 2019.

Efforts to get the governor to issue another proclamation to allow peace to reign failed. Even the intervention of the National Assembly did not persuade Obaseki.

Obaseki insisted that the 14 lawmakers-elect, loyal to former All Progressives Congress (APC) National Chairman Adams Oshiomhole, did not present themselves to be sworn in.

They stayed away from legislative activities while asking Obaseki to issue a fresh proclamation letter for their inauguration.

But there was a twist yesterday when the 14 lawmakers-elect were inaugurated at an undisclosed location in Benin and elected Victor Edoror (as Speaker after unanimously removing Okiye at an “emergency plenary session”.

They were joined by three former pro-Obaseki lawmakers who declined to follow Obaseki to the Peoples Democratic Party (PDP) and pledged their support for APC candidate Osagie Ize-Iyamu. This makes it 17 members.

The new speaker, in his inaugural address, said the Seventh Assembly would focus on its legislative duties.

He called for unity, saying there was no victor, no vanquished.

Edoror urged Inspector-General of Police Mohammed Adamu; Commissioner of Police Babatunde Kokumo and other security chiefs to eject the thugs that invaded the Assembly complex so that today’s plenary session can hold.

They visited the police commissioner after their sitting. 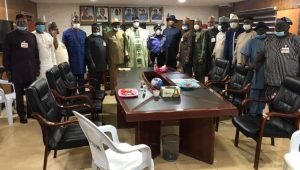 The lawmakers had tried to gain access to the House of Assembly on Ring Road, Benin City, at about 9 am, but the Assembly had been besieged by security agencies and protesters. The pro-Obaseki protesters chanted solidarity songs.

As the 14 lawmakers-elect could not access the House, having been blocked off by the protesters, they left.

The governor and his deputy came to the complex and condemned an alleged bid to take over the House by force.

Moments after addressing reporters, carpenters climbed the building and began removing the roof. The symbolic mace on top of the complex was removed.

Okiye said the complex was under renovation and that the presence of security operatives at the entrance scared the contractor and workers away.

Outside, trucks dropped four heaps of gravel, granite and sand right in front of the Assembly complex.

Addressing reporters at the Assembly complex, Obaseki said he would always protect the legislature.

He said: “I want to assure you that as the Governor of Edo State, I will do all within my constitutional powers to protect the sovereignty of the legislative arm of government.

“Nigeria is governed by laws and the constitution of the country. Mr President has always insisted that we must follow the rule of law and do things according to the law. Nobody in this country is above the constitution.

Addressing Okiye, he said: “Mr. Speaker, go about your normal duties the way you should and the way the constitution prescribes.

“For us as the executive, we owe you the entire instrument available to us constitutionally to protect you and to protect the state.”

Deputy Governor Philip Shaibu said the government would not allow other members of the Assembly whose seat had been declared vacant to take over the House.

He said the 14 lawmakers-elect were yet to be validly inaugurated, urging President Muhammadu Buhari to save the Assembly from being destabilised.

Okiye said he and his colleagues would do everything to protect the Assembly’s sanctity.

He said: “I am happy His Excellency is here. We were inundated with various rumours and all kinds of threat calls last (Wednesday) night.

“On Wednesday, in our sitting (inside Government House), we acted on a very reliable intelligence report that these people from Abuja were coming to invade the House to take over the sovereignty of the House and sacred nature of the House and we made it clear to the public.

“Unfortunately, the former Deputy Speaker (Yekini Idaiye) was one of the cohorts to be used and members were not comfortable with that. I do not have the control; members raised a motion that his office must be changed.

“We are going to keep vigil here to forestall the alleged illegal invasion of the House by anybody.”

He described his election as the end of a “deformed” and “lopsided” democracy in the state.

Edo APC Media Campaign Council, through its spokesman, Prince John Mayaki, quoted Ize-Iyamu as saying: “I am happy to receive the news of the emergence of Rt. Hon. Victor Edoror as the Speaker of the Edo State House Assembly.

“His emergence marks an end to a lopsided and deformed democracy, ushering in a new and reformed era of inclusive governance and non-discriminatory politics.

“Edoror’s emergence is also a victory for the people of Edo State, for the constituencies previously sidelined, and for the House-members’ elect who had been unfairly denied their elective right to represent their constituencies in government.

“Personally, as someone who has known Edoror for a long time, I am convinced by the great personality he is. I am sure that this joy sweeping across Edo as the shackles of tyranny breaks today (yesterday), will not be temporary.

“Backed by an overwhelming majority, Edoror is demonstrably the people’s choice for the position.

“And it is in line with commonsense that for an individual to sway such massive support, he must have demonstrated great qualities admired and necessary for leadership and development, and as such is being trusted with the enormous task of piloting the House from its darkest moments, as cast into by the reprehensible divide-and-rule politics of the outgoing Governor Godwin Obaseki.”

The Campaign Council denied claims by Obaseki’s camp that Ize-Iyamu and APC facilitated the arrival of policemen from Abuja to block Assembly complex.

The Council said the APC does not control the police and other security agencies.

It accused the state government of carrying out several onslaughts against the constitutional independence of the legislative arm of government by attacking its members-elect and denying them representation.

The Council said Obaseki was in the best position to tell the world who was behind yesterday’s police blockade on the Assembly complex.

It said: “It is a known fact that the outgoing Edo governor has treated the House of Assembly, an independent and co-equal branch of government, as a mere extension of his office, through the brutalisation of members-elect (14) and the denial of representation to the majority of members.

“In Gestapo style, Obaseki hijacked a tiny minority and purportedly inaugurated them in the dead of the night.

“The sham inauguration was condemned and set aside by both arms of the National Assembly after their separate investigations revealed that the members, and indeed the Clerk, were forced to participate in the illegality under threat to life.

“With these criminal antecedents, we believe if there is any unwholesome activity ongoing at the Assembly complex, it is Obaseki who is in the best position to explain to the world what is going on and why.

“Comrade Adams Oshiomhole (former National Chairman of APC/ex-governor of Edo) or the APC, does not control the police”.

The campaign council noted that state government should explain why a branch of government had been holding plenary sessions inside the Government House for months in the guise of a supposed “fumigation and renovation exercise” at the Assembly complex.

It accused Obaseki of leading thugs to vandalise the Assembly complex to prevent the 17 pro-Ize-Iyamu lawmakers from accessing it.

The Council said: “Obaseki besieged Edo Assembly complex on Thursday, out of fear that his illegal House of just five members will be overturned and replaced with a more representative Assembly.

“The outgoing Edo governor has placed the independence of the legislative arm and the democracy of Edo State on trial.

“He has ordered the vandalism, ruin and destruction of the Assembly complex, under the pretence of a renovation exercise.

“Obaseki has created needless panic and fear in Edo State once again because he is afraid.