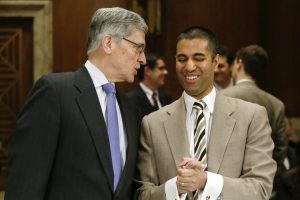 House Republicans jammed through a measure on Tuesday overturning the Obama administration’s rules that would have banned telecom and cable companies from sharing customers’ personal information, including web browsing history, without their consent.

The FCC adopted rules last October that required companies like Comcast and Verizon to get their customers’ explicit permission before they could share “sensitive” data like Social Security numbers, or information pertaining to children or health. Under the rules — which are not yet in effect — companies also had to tell customers and law enforcement if a potentially harmful data breach occurred. (Verizon is the parent company of The Huffington Post.)

In a heated floor debate on Tuesday, House Republicans sought to paint the rules as an example of government overreach. “These broadband privacy rules are unnecessary,” said Rep. Marsha Blackburn (R-Tenn.), who introduced the resolution.

But House Democrats warned that Republicans were scrapping common-sense privacy regulations — and predicted a dim future without them. Rep. Michael Capuano (D-Mass.) pointed to a patent application from an ISP for a cable box that would detect whether people were cuddling on the couch through a thermal camera, then show them TV commercials for a romantic getaway or contraceptives. “That’s what this bill will allow, and you can’t turn it off,” he said, calling it “terrible.”

The measure uses the Congressional Review Act, which allows lawmakers to undo any regulation within 60 days of its finalization, while also barring agencies from writing a “substantially” similar rule after the original one has been overturned. That means there’s a chance the FCC might be banned from regulating ISP privacy issues in the future, said David Segal, executive director of Demand Progress, a grassroots group.

Trump ran a populist campaign, but his vision for the FCC, a government agency that is supposed to protect consumers from predatory telecom and cable companies, is shaping up to be the opposite, consumer advocates say. The current FCC chairman, Ajit Pai, also opposed Obama’s privacy rules when he was the agency commissioner under the prior administration.

The rules drew concern from staff of the Bureau of Consumer Protection at the Federal Trade Commission when they were proposed. They noted that the rules “would impose a number of specific requirements … that would not generally apply to other services that collect and use significant amount of consumer data. This outcome is not optimal.”

But the FCC “ultimately incorporated the vast majority of the FTCs suggested changes to the rules, and the FTC in fact supported the final rules,” according to Sohn.

Internet service providers say it’s not fair that they have to be subject to regulations that tech giants like Facebook and Google, which the FTC oversees, don’t have to follow. Republicans have argued in favor of a privacy framework based on the FTC’s approach. But the rules by that agency moderate industry behavior after harm occurs, according to Sohn — while the FCC’s regulations have the power to protect consumers before they are harmed.

He said that “consumers have entered into a business relationship with ISPs that ISPs are now seeking to change … [but] it’s not their information, it’s the consumers’ information.”

Overturning the rules is a win for the 21st Century Privacy Coalition, a group led by former Federal Trade Commission Chairman Jon Leibowitz. The coalition is backed by telecom companies and has spent millions of dollars on lobbying in the past few years.

“I can’t tell you [the bill] is not repealing privacy regulations, it’s a pretty blunt instrument of repeal, CRA” Leibowitz told HuffPost. But he said, “in a very partisan Washington, where often the only choices are binary, the FCC passed a very flawed regulation, one that was criticized by the FTC, my former agency.”

He argued that if the bill is enacted, the FCC can still continue to protect privacy. To do that, it could write another rule ― “if that rule takes a different approach.” When asked whether he thought a repeal would improve privacy for consumers, he said only that the proposed rule will “increase costs to consumers and reduce choices, and reduce competition for privacy.”

“These companies are just trying to exploit consumers’ data towards ends of private profit,” said Segal of Demand Progress.

As of Monday, the Congressional Progressive Caucus said it was opposed to the measure and would be pushing for Congress members to vote against it. The office of Rep. Mark Pocan (D-Wis.), first vice chair of that caucus, also noted that they had received a fair amount of calls and emails in opposition to removing the rule. “Considering how much access providers already have to highly sensitive data, it is absolutely unacceptable for them to monetize personal information,” Pocan said.

But that wasn’t enough to stop most House Republicans from approving the resolution. House Minority Leader Nancy Pelosi (D-Calif.) on Tuesday asked ISPs to weigh in on the measure. “This is about profit,” she added, “from America’s most intimate, personal information.”