Kindly Share This Story:
Despite United Arab Emirate aborted Air Peace flight from Nigeria into her air space Nigeria civil aviation in the last one week has been receiving world commendation. The aviation sector which was recently rated as having one of the highest number of unserviceable aircraft in the world is suddenly being seen as one with the highest potentials on the Africa continent, capable of competing with the best in world civil aviation. 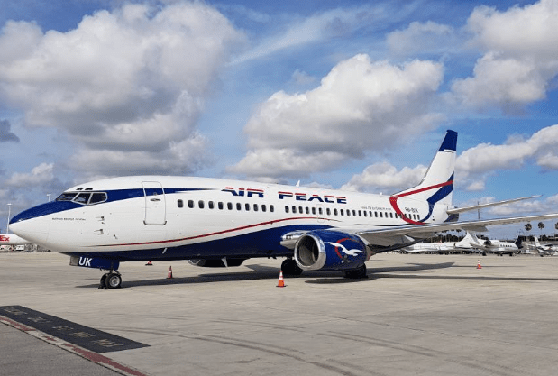 This sudden words of applause is due to the delivered the first of the 13 brand new Embraer E195-E2 by Nigerian Air Peace airline placed order for in April 2019 at the Embraer Business Meeting at Port Louis, Mauritius.

The order include purchase rights for additional 17 E195-E2 jets. If fully executed, the contract has a value of about N640.5 billion naira or $2.12 billion dollars based on the current price list. Data from Planespotters.net shows that four more E195s are already in production in Embraer factory for Air Peace.

Commenting on the acquisition of the new Embraer E195-E2 jet by Air Peace in a statement titled “Air Peace’s First E195-E2 Has A Groundbreaking Business Cabin”, Mr Pranjal Pande, a renowned Indian Aviation writer and commentator said , “ Nigeria’s Air Peace has taken delivery of its first Embraer E195-E2 this week. While the delivery of any new aircraft type is notable, the business cabin on this E195 is particularly unique, offering all passengers direct aisle access”.

“Usually, business class on regional jets isn’t a notable experience, with relatively narrow seats in a 1-2 or 2-2 configuration. However, Air Peace’s new E195 fleet shatters this idea of not having direct aisle for all business passengers”.

“The carrier has given every passenger direct aisle access by offsetting each seat from the one next to it. This allows passengers to enter and leave their seats without disturbing or needing to hop over their seat neighbors”

“Registered 5N-BYF, the new E195 marks the first delivery for Air Peace and the first E2 jet to any African airline. The leading Nigerian carrier will deploy the aircraft on regional routes, taking advantage of the plane’s impressive 2,600 nautical mile range”.

Speaking during the ceremony to receive the new Embraer aircraft at the Nnamidi Azikiwe International Airport, Abuja, the Brazilian Ambassador to Nigeria,, Mr Ricardo Guerra de Araujo, said the feat of Air Peace was a remarkable one for Nigeria and Africa. He revealed that Air Peace is the ” launch customer of this aircraft type in Africa”.

The ambassador also expressed optimism that Air Peace would consider direct flight between Nigeria and Brazil as it has demonstrated ability to operate into any destinations during its evacuation flights at the peak of coronavirus pandemic.

Explaining why the airline is purchasing 13 of the aircraft type, the chairman of Air Peace , Barrister Allen Onyema said : “The E195-E2 is the perfect aircraft to expand our domestic and regional operations. We are aware of the aircraft’s impressive economic performance as well as its unique configuration, the major reasons we placed an order for this aircraft.

”The E195-E2 aircraft will further help us actualise our ambition of connecting not just the whole of Nigeria, but the entire African continent, while feeding long-haul flights from our Lagos hub.”

“It is also great that we will be the first E2 operator on the African continent. We already have the ERJ145s in our fleet. So, we understand the high standards of Embraer products.

“The E195-E2 aircraft will strengthen Air Peace’s drive to deploy the right kinds of planes to under-served and unserved domestic and regional routes under its no-city-left-behind project.”

Air Peace is now the biggest in West Africa. The coronavirus pandemic has , however, slowed its long-haul ambitions as the airline already has approval to operate into Mumbai, India, Tel Aviv, Israel, London, Houston, USA amongst others. It currently operate Lagos – Johannesburg, South Africa direct route and Lagos-Sharjah, Dubai, UAE route which it has just resumed again in February.

Recall the airline had launched the no-city-left-behind initiative sometimes last year with scheduled services into Yola, Jos, Minna, Calabar, Akure, Ibadan, Kebbi, Asaba and other domestic destinations . The acquisition of eight Embraer ERJ145 50-seater jets has helped it to actualise this initiative.

It has also acquired four Boeing777 aircraft for its international operations into South Africa, Dubai, and up coming routes like Beijing, India, London, Israel and the U.S., among others. All these acquisition of aircraft and routes expansion are happening within the last six years the airline has operated.

The Minister of Aviation, Senator Hadi Sirika, who was a special guest of honour during the delivery ceremony of the new aircraft at Abuja Airport, commended Air Peace for keying into the Aviation Roadmap of the federal government.

According to Sirika, the aviation roadmap of the current administration encourages airline operators to buy new aircraft as it was the right way to go for “a modern commercial carrier that wants to compete, survive and endure”.

He said Nigeria has had its fair share of airlines using the wrong aircraft type, earning the nation the bad reputation of being among countries with the highest number of unserviceable aircraft.

The Minister said: “We must never forget that the propensity to fly is determined by the price of the ticket, and in turn the choice of equipment. The equipment type determines the profitability and sustainability of operations. There is no way an airline that has invested in the wrong equipment can compete with one that has new aircraft. A new aircraft is fuel-efficient, requires minimal maintenance, the low workload on pilots and higher profit; all of which wrong equipment does not have”.

“I will urge other operators to rethink their type of equipment for sustenance, following the example of Air Peace. Air Peace has keyed into the sectoral roadmap of aviation and it is commendable.”

Speaking at the Customer Experience Centre of Embraer Aircraft Manufacturing Company in San Jose, Brazil while receiving Air Peace inspection team to the factory, Mr. Francisco Gomes Neto, Embraer’s Chief Executive Officer (CEO), said that Air Peace had made history with the delivery of the aircraft.

Neto said that the aircraft was one of the most fuel efficient in the world with state-of-the-art equipment, adding that the airline’s engineers would take delight in the technology, its pilots would fly the brand with ease, while its commercial department would appreciate its economic value.

He noted that Air Peace was the first airline on the continent to operate the aircraft brand, stressing that Embraer had consistently delivered quality airplanes to clients in the past 52 years.

He said: “It’s an honour to welcome the Air Peace team to Brazil at this time. Air Peace is a wonderful example of a progressive company, which has been providing job opportunities for qualified personnel in the sector.

“Air Peace will be the first airline operator in Africa to fly the E195 aircraft brand. You are taking delivery of two of the aircraft brand at the moment and, while the third would be delivered before the end of the year (2020).”

“The new 124-seat E2s complement the airline’s eight 50-seat E145s Air Peace Hopper. The Embraer fleet will create greater regional and domestic connectivity from the carriers Lagos hub. Apart from the 13 195-E2s on firm order, Air Peace has some purchase rights for 17 more of the aircraft,” he said.

Responding during the delivery ceremony in Abuja, Air Peace chairman, Barrister Allen Onyema expressed appreciation to President Muhammadu Buhari, the Aviation Minister and the National Assembly for creating an enabling environment for the growth of the aviation sector through waivers of Value Added Tax (VAT) and duties for commercial aircraft, engines and spares.

Onyema said : “The minister threw us the challenge to acquire new aircraft. That is what we have achieved today. The brand new aircraft made it a great day for Nigeria. Those aircraft will create at least 8000 additional jobs. That is my joy. At the two-week interval, more aircraft will start arriving in Nigeria,” he added.

Back in Nigeria, aviation stakeholders have been celebrating the feat achieved by the airline.

When asked how the new acquisition will impact the airline, Akporiaye responded , ” Yes it definitely will. It will enable the airline to increase their routes and add more fleet on major routes to better serve their clients and we hope that the long delays passengers have been experiencing by Air Peace will be a thing of the past”.

Abiioye said : ” Given the current pitiable situation we have found ourselves in the industry with the constant embarrassing antics of AMCON, it is heart warming that Air Peace is rising to the occasion all the time, soothing frayed nerves in the industry by improving on safety, comfort and seamless air movement of passengers from point A to B”.

” I am delighted seeing these machines from Air Peace…we only need to support the airline by flying with her, encouraging the Management and Staff and urging government to create all necessary and permissible environment for the airline to thrive and provide same enabling environment for other start up airlines.”

” There is dearth of enough aircrafts, which has ultimately led to flight delays and or cancellations. With these fuel efficient and economically viable machines, a new lease is being brought to fore for passengers and the sector. It is hoped that Air Peace will also enjoy patronage from the government and encouraged with further waivers where necessary.

Commenting also on the feat of the airline, Mr Fortune Idu, Chairman Airport Business Summit said : ” It is very commendable of Air Peace to continue to increase flights even in this recession and downturns in the aviation industry. Bringing in these new aircrafts is a confidence booster to the stability of the Nigerian aviation industry and it is a big incentive to attracting investors into Nigeria market”.

” But something must be done to increase generally local flights and the use of air transport as most viable mode. So the airline’s can increase frequency within local routes and be able to have more passengers and make profit.”

” There will always be a great competition on International route coupled with diplomatic politics but a vibrant local and sub regional activity will guarantee a stronge future for the industry,” he added.

There is a general consensus that a new dawn is beginning in the Nigeria aviation industry with Air Peace new acquisition. Others domestic airline operators will be challenged to follow the Air Peace example.