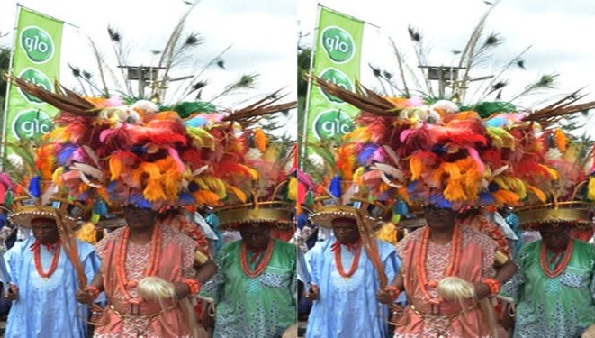 The 2019 Ofala Festival in Onitsha, Anambra State, continued on Friday with it initial momentum as the paramount ruler of the ancient town, Igwe Nnaemeka Achebe, extolling the virtues of Globacom, the national telecommunications giant, the sponsored company, which he said had been sponsoring the festival since 2011.

Speaking after he made a grand royal entry into the Ime Obi arena, accompanied by his Ndi Ichies, and other palace functionaries, the Igwe commended Globacom for supporting the Ofala festival for the past nine years, adding that the company in its capacity as the official corporate sponsors had successfully transformed the festival with the introduction of several innovations. He said this had made it one of the top tourist destinations in the country.

The Obi added that Globacom is also the sole sponsor of the Oreze International Arts Exhibition, which has so far exhibited over 4,000 works of artists at the forum. He added that the partnership between Onitsha traditional council and Globacom has been of immense benefit to the festival.

“Our appreciation goes to our main sponsor, Globacom. The partnership with this company has contributed significantly to the growth of Ofala”, Igwe Achebe said. He   expressed delight that the Nigerian Tourism Development Corporation had endorsed Ofala as a major festival in Nigeria, adding that the National Gallery of Arts had also provided support for the Oreze Arts Exhibition.

“To us, ndi Onicha, we are encouraged and energised by the knowledge that our kingdom is moving forward through our collective efforts”, he enthused.

Addressing the media at the event, Mr. Noel Udeme, Globacom’s Regional Activation Manager, South East 2, said, ”Globacom’s consistent sponsorship of the festival for the past nine years is an indication that we do not only love the Onitsha people, but that we are interested in the preservation of their cultural values”.

“Being a wholly Nigerian company, Globacom has contributed more to the promotion of the culture and values of the people of Nigeria, more than any other corporate organisation. We are not relenting in our efforts at promoting what makes us who we are as a people. Our culture is our life and that is the driving force behind the Glo Heritage Series, the platform we are using to support Ofala festival and other major festivals across the country”, he added.

The Royal Banquet, sponsored by Globacom in honour of the Igwe, comes up on Monday at Dolly Hills Hotels, Onitsha

We reported earlier that a Nigerian startup, Reelfruit and nine other startups from across Africa…