Controversy has ensued over a reception which was designed in honour the newly appointed Director General of Nigerian Maritime Administration and Safety Agency (NIMASA), Dr Bashir Yusuf Jamoh which held last Wednesday at Eko Hotel and Suites, Lagos. 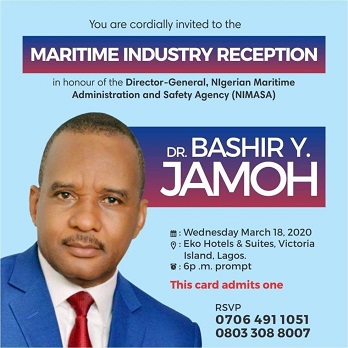 As you can recall, Dr. Jamoh shortly assumed office as helmsman of NIMASA is a highly respected industry groomed professional, who operators have being commending the Federal Government for in a long time appointing a core maritime figure to head the nation’s maritime administration, saying that he is a clear case of a round peg in a round hole.

It is against the backdrop of Dr. Jamoh’s sterling qualities that industry operators say that it will be a disservice to the industry to be linking his name to the reception which is now a subject of controversy among a section of the Nigerian maritime media

Trouble water started with the invitation card for the controversial party which trended at most maritime whatsapp platforms penultimate week did not reveal the identities of the organizers of the reception who were not from NIMASA.

The hits of controversy started when newspaper learnt after a report by an online platform on the party pointing out the anonymity of the organizers of the reception.

The anonymity of the organizer developed and has degenerated into a letter from the Chambers of Pottershed to Mr. Sylvanus Obasi, Publisher of Platform Reporters, alleging defamation of Mr. Bolaji Akinola, publisher of Ships and Ports who the letter indicated was the unknown organizer of the reception.

The letter which was signed by A. O Akanji (Mrs) for Pottershed Chambers stated in part: “Our client has furnished us with your online publication of 19th March 2020, captioned “Jamoh’s ‘Deception Party’: A Frivolous Bad Beginning”… .

“The true and ordinary meaning of your publication depicts our client as deceitful, corrupt, insincere, a schemer and sycophant who organised a Reception Party, surreptitiously to incur favours from Dr Jamoh”. 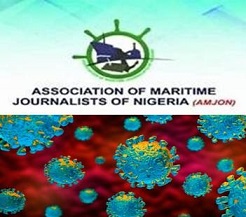 “In view of this, we demand that a retraction of the damaging publication and an unequivocal apology be made in writing to our Client and on copied to all Platforms where the libelous publication were shared (within 7 days from the receipt of this letter).

” In addition, we demand that the said publication be removed from your website within 24 hours from the receipt of this letter. Note that the retraction of the publication must be given the same place of prominence as the initial damaging publication”, the letter stated, adding that failure to do as demanded within the stipulated time would lead to “legal proceedings against you in the competent Court of Law… without any further communications from this Chambers”.

Speaking on the development, however, Obasi said that he had forwarded the said publication and Bolaji letter to Platform Reporters lawyers who have been instructed to understudy the two documents and prepare to meet Mr. Bolaji’s lawyers in court if they choose to action the case.

He maintained that his company would not retract the story or apologise to anyone because the publication did not in any way mention Mr. Bolaji Akinola or his company, Ships and Ports Communications as the organisers.

He added that the organisers also shoot themselves in the leg on any defamatory claims when it released an online graphic poster of the reception party without showing any personal or corporate identities of the behind the reception as the host, thereby choosing to be faceless.

“You can’t hide under the veil of anonymity to perform an act, and when the press addresses you anonymously, you now jump into the open and claim defamation. It doesn’t work that way. There are five conditions a statement must meet before it can be actionable as defamation”.

“Besides, as a critical maritime stakeholder and journalist by profession, I have a ‘qualified privilege’ by law to ‘express my personal opinion’ and make ‘fair comments’ for public interest on events and happenings in the maritime sector, that was what I simply did in that publication, and I have no grudge against anyone neither do I owe anyone any apologies”, Obasi said.

NURTW chairman, 3 others net for drug trafficking in Ondo, Benue

Kindly Share This Story:Chairman of the National Union of Road Transport Workers, NURTW, in Ijero…