The Lagos State Ferry Service Company (LAGFERRY), has intimated a promo package for ferry passengers as part of efforts to reward them and encourage water transportation in the state. 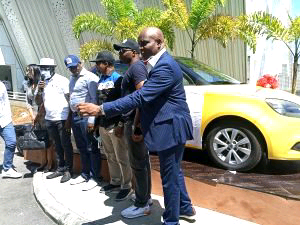 How transparency is the process though the LAGFERRY Managing Director, Mr Ladi Balogun, in his speech at the flag-off of the Mega Raffle Draw tagged “SAILIN ‘N’ SMILIN RAFFLE Promo”, held in Lagos on Thursday, said that the exercise was to create more awareness on water transportation.

Balogun said that the promo was targeted at rewarding loyal LAGFERRY customers to popularise the usage of water transportation to ease congestion on the roads.

He recalled that Gov. Babajide Sanwo-Olu, on February 4, 2020, inaugurated the Ferry Terminal at Badore, adding that 502,000 passengers had been moved across waterways since operations began on February 6, 2020.

“With the support of the Lagos State Waterways Authority (LASWA), LAGFERRY has never recorded a single accident on waters ways in all the 13 ferry terminals in the state since February 2020.

“This is because the regulator (LASWA), ensures that our captains, deckhand and other personnel are adequately trained to sail Lagos passengers safely.

“Gov. Sanwo-Olu has approved, and we have taken delivery of, seven additional boats, making 20 boats, between February 2020 to June 2021, which will be inaugurated soon.

“In Nigeria, no boat operator owns up to 20 fleets in operation. We are making history by having that much in our fleet,” Balogun said.

He particularly recalled that the Lagos State Government transported the Super Eagles from Lagos to Benin Republic through the waterways, adding that the team testified that the water transportation added to the level of their productivity.

Balogun said that water transportation was the safest means of movement in Nigeria, adding that connecting the road to the water was becoming easier with the launching of “First and Last Mile bus” by Gov. Sanwo-Olu.

He urged Lagos residents to patronise water transport which he described as the safest means of transportation, and win prizes that would be given at the end of the third quarter.

Balogun said that the raffle would begin on July 1.

According to him, the consumer authority of Lagos State would be involved to ensure that passengers rights were not infringed upon by either LAGFERRY or other stakeholders.

Mr George Ogan, Chief Executive Officer of Elivate 9JA, in a remark, said that the partnership would excite ferry users, and explained that there were lots of prizes such as microwaves, washing machines, television sets, cars, among others.

Ogan said that there would be refreshment for early passengers of LAGFERRY during the promo.

He said that the promo would also generate money for government without increasing ferry fares, adding that the development area would extend the awareness to increase participation.

In his goodwill message, the General Manager of LASWA, Mr Oluwadamilola Emmanuel, commended the collaboration from both the public and private sector, adding that no single sector could harness it potentials alone.

Emmanuel commended LAGFERRY for the initiative and commended the support of other agencies for making the promo possible.

Also speaking, the General Manager, Lagos State Consumer Protection Agency, Mr Afolabi Sholebo, said that involving consumer protection had shown the level of sincerity of the stakeholders in the promo.

Sholebo assured passengers that their rights would be protected “to the last minute”, and urged them to patronise water transportation.

Are commended LAGFERRY for creating awareness that was boosting the quest to ensure that Lagos residents shifted from road to water transportation.

Mr Abiona Babarinde, General Manager, Marketing, Coscharis Groups, in a remark, said that collaboration with Lagos State was adding value to water users in the state.

Babarinde said that the promo would give opportunities to Lagos residents to become car owners, courtesy of LAGFERRY, adding that the game would be transparent

Echoes of the June 12 Struggle