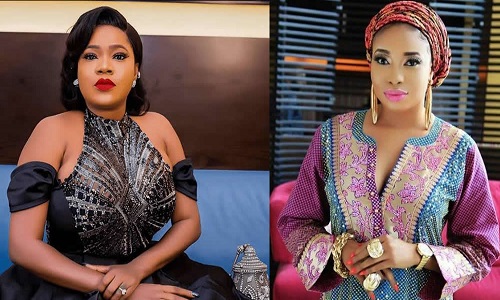 The squabble between controversial Nollywood actresses Toyin Abraham and Lizzy Anjorin appears not to be ending soon.

The hot exchange in the past couple of days came to full glare with the actresses going back and forth with various allegations. And this appears to be a tough time for their fans and perhaps a sort of entertainment to neutral observers.

Lizzy Anjorin allegedly accused Toyin Abraham of running the blog “Gistlover.com” alongside multiple Instagram accounts to troll her and other colleagues in the movie industry. Anjorin claimed that Abraham leaked damaging reports about her to blogs.

The fight however came to a full glare with a post by a popular actress alleging that when Toyin Abraham put to bed, she didn’t send her a congratulatory message.

This action sparked a debate on her page while her fans hurled insults on Anjorin; others said Abraham kept mute as this was going on. However, the issue was later watered down when Toyin went on to apologise that she saw her message.

After this scenario, Nigerians woke up to see that the social media have been in a frenzy ever since Anjorin claimed the actress was living a fake life and didn’t even have a car nor a house of her own as she claimed.

She also alleged that contrary to the rumour that she gave birth to her child abroad, that it was actually at a local “agbo” seller’s house and had to borrow costumes for her photo shoot, all in pretence to show she’s wealthy and had arrived.

Interestingly, the nursing mother, with the help of her publicist, Big Sam of Broadway TV, released a video showing her after she welcomed her son in a hospital in Lekki, Lagos.

On why she had her baby in Nigeria at the Vedic Lifecare Hospital in Lekki, Toyin Abraham said: “I got to know this place when I came to visit Princess Shyngle when she had issues; and I loved how nice everyone, the doctors and nurses, was.

“Since I had just moved into Lekki with my husband then, I decided to make this my family hospital. It has been a great experience, trust me. I am so happy and that is why I decided to have my baby in Nigeria because I trust the people here. I actually travelled out but I came back to Nigeria because I wanted him here at Vedic Hospital, with trusted hands.”

Meanwhile, Abraham has sent a legal warning of ‘cease and desist’ notice letter to Anjorin, through her lawyers, requesting her to forward a letter of apology via their office, and on her Instagram page.

Abraham’s lawyer said she issued the last warning to Anjorin and if she failed to reply within 24 hours, they would be forced to file a N500 million damages legal action against her.

However, Abraham also called Anjorin a ‘pig’ in the caption of the post.

“Silence is not golden,” she posted.

“Rather than wrestle with a pig, it might be ideal to let the pig know that it belongs to the pen. I’m no longer speaking on this, my management team and attorneys are taking this up. Cc @bbbmedia @officialsamolatunj1.”

In her own counter-reaction, Anjorin, in a statement, revealed that she has written a petition to the National Drug Law Enforcement Agency, NDLEA, to investigate both of them, as she has been accused by Toyin of dealing in drugs.

Meanwhile, Anjorin is of the opinion that Toyin has always been a cocaine user from the post she made on Instagram.

Some of the veterans in the movie industry have come together to intervene in the ongoing messy fight between the two actresses.

Yoruba actors Bolaji Amusan (Mr Latin), who is the president of the Theatre Arts and Motion Pictures Association of Nigeria (TAMPAN), and Yinka Quadri, disappointment over the Instagram spat said they would not accept “any act of indiscipline” from the feuding actresses.

“We ought to have used the social media for more useful and impactful things and not this misbehaviour,” wrote Ajeyemi.

“We are called celebrities because many people look up to us and want to be like us. Why are we misleading these people; we are meant to be good teachers and not a bad influence on society. Please, and please, let’s have a changed mindset to do good, if not for anything for the fact that people are looking up to us in so many ways of life. God bless you all.”

Sadly, social media feud is not new to the movie industry scene. It has become very common among Yoruba actresses. This year alone, we have had a series of dramatic fights from Mercy Aigbe to Iyabo Ojo and the latest one from Lizzy and Toyin, and a host of other Yoruba actresses.