Adedeji Williams Adenuga, the man suspected to have set his ex-girlfriend’s family of nine ablaze in Okitipupa Local Government Area of Ondo State, has explained the reason for his action. 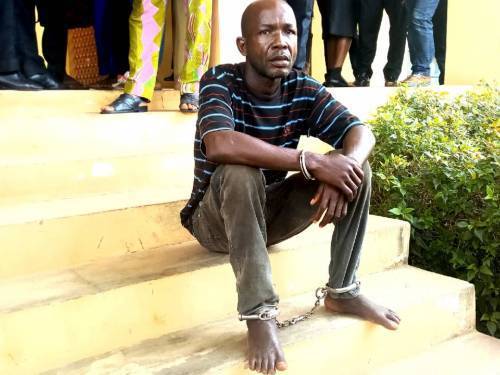 After disagreeing with his then girlfriend Titi Sunmonu, the middle-aged man brought a jerry-can laden with petroleum in the midnight, gained entry into the building by breaking a window, and sprayed the family while they were asleep.

Adenuga, best known as ‘Ojuode’, had escaped from the town after perpetrating the alleged act; however, after “round-the-clock investigations” by the Police, he was arrested on Monday evening in Ijebu Ode, Ogun State, where he was wandering under a bridge.

Speaking with reporters at the headquarters of the Ondo State Police Command in Akure on Tuesday, Adenuga said he burnt the family of his ex-girlfriend after she aborted a pregnancy she had for him.

He claimed he had invested heavily in the lady before she jilted him based on her elder sister’s advice.

He narrated how both of them had been having relationship issues, and were always ending up at the police station for settlement, Saharareporters reports.

“What actually happened was that Titi aborted the four-month-old pregnancy that she had for me while we were dating each other,” he said in an emotion-laden tone.

“And while she was staying with me, I spent money on her because there is this her elder sister called Jumoke who used to collect money from me.

“The elder sister was always controlling her and teaching her what to do, and the issue became open that we dragged one another to the police station.

“We later resolved all the issues but surprisingly, Titi moved out of my house with all her property, saying her sister said I should come and pay N20,000 for her bride price before she would return.

“I begged them to give me time to look for money, and do the needful but they refused and started playing me, having spent so much for her. I went to the station to report what she and her elder sister were doing to me but the Police saw it as a small issue, so they settled it.

“After we left the station, they began to abuse me and make jest of me, saying I was a failure and not even a man for dragging them to the police station.

“In fact, they threatened me. They said they would deal with me and even kill me if I did not desist from reporting them on the streets. I saw those words as big threats.

“That same day, I planned to take an action and I went to the gas station at night, bought fuel and stormed their house and poured petrol inside the room while I ran away.”

Undie Adie, Commissioner of Police in Ondo State, said that Adenuga was apprehended following “intense manhunt and investigations” by the Police.

“He was arrested in Ijebu-Ode area of Ogun State. The girl who he said jilted him is the only one that survived. She is still receiving treatment in the hospital.”