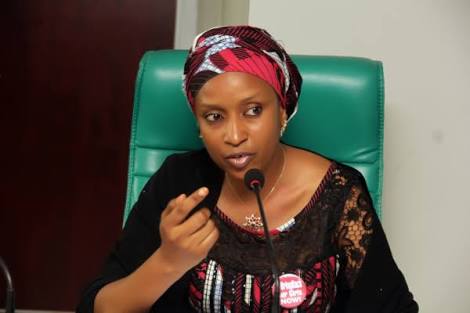 Hadiza Bala Usman, director-general of the Nigerian Ports Authority (NPA), says she cannot be intimidated by anyone.

Speaking in an interview with TVC on Friday, Usman said the authority has been able to achieve a significant level of success within one year.

She attributed her success to resilience and determination, explaining that her fight against corruption has drawn the ire of some people.

“I think it is being forthright, knowing your onions and not being afraid to take on any institutional challenges. The Nigerian public is not comfortable with a person that comes on without having any entrenched interest or focusing on prioritising the general interest of Nigeria in every of their activities as a public servant,” Usman said.

“My tenure is five years and this is year one. I have been able to achieve a significant level of success within one year.

“There have been circumstances where people have threatened me but I confronted them and made them understand that I cannot be intimidated by anyone.

“We also discovered areas of revenue leakages. This is fundamentally where we found a lot of the compromises in the NPA.”

Usman said though the agency is not supposed to be involved in the construction of Apapa road, NPA has been playing a major role in the project.

“For now, the construction of the wharf road is being partly funded by the NPA but we felt it was very critical and important. So we reached out and provided N1.8bn naira to fund it.

“Ministry of works is supervising and other private entities like Dangote and flour mills are providing contribution but NPA is the highest contributor.

“We are working on alternative routes while the construction is on going. We plead with individuals and businesses on the Apapa areas to understand and assist us. We are also looking at what can be done with Liverpool Coconut reach Tincan Island access road.

Usman said the authority is looking at dredging the Calabar ports as well as working on the bridge that links Calabar to the north-east and north-central to make it accessible to cargo trucks.

“And about the investigation from the national assembly, I welcomed the investigation. For me, it goes beyond investigation. It is also about if you identify a problem, how are you solving it. I had identified that we do have a high cost of dredging in our ports and we have put in place mechanisms to amplify it and significantly reduce the cost.”

She also said contrary to public opinion, she had not received any letter of investigation from the presidency, adding that she has had several meetings with the presidency.

She emphasised the transparency of the port’s operations, while welcoming further investigations which according to her might bring the port’s attention to areas of improvement.

Usman also said the authority is on target of its revenue projection. She said the target for 2017 is N450bn out of which N117bn has been raised in the first quarter of the year.

“We are not yet close to the vision but we are working close to achieving it. From July 18, we would be unveiling our framework to help close the gap in the inspection of cargo,” she said.

Asked what she would like to be remembered for in her capacity as the director general of the NPA, Usman said “I’d like to have transparency entrenched in our operations and improve our operational efficiency.