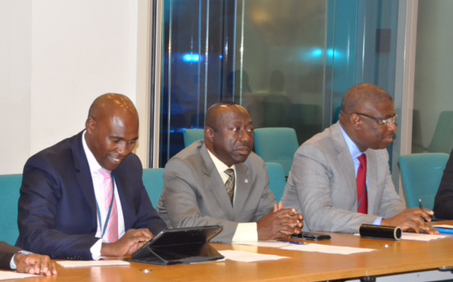 The Chairman of Association of African Maritime Administration ( AAMA), Dr Dakuku Peterside  has charged African stakeholders in the maritime sector to work together to ensure Africa takes its rightful place in the global maritime community.

Dakuku stated this in a meeting with representatives of African countries at the International Maritime Organisation (IMO), under the auspices of African Maritime Advisory Group (AMAAG) at the IMO Headquarters in London.

Dr Peterside who is also the Director General of the Nigerian Maritime Administration and Safety Agency (NIMASA), briefed the AMAAG members of the modest progress recorded by Heads of African Maritime Administrations working together and plans going forward to implement most of the instruments signed by African Heads of State and Government in other to reposition the continent’s maritime community.

According to the AAMA Chairman, “Africa is a major stakeholder in maritime so we must take our rightful place and that can only happen if we work together,  and these cooperation issues would be brought to the front burner during the meeting of the Executive committee of AAMA coming up in September in Egypt ” Dr Peterside said.

He also noted that AAMA has put in place policies that will enhance African maritime Administrations working as a block to get a better share of the global maritime trade beginning with representation at the IMO.

Dr Dakuku who was accompanied by the Director General of Ghana Maritime Authority Mr. Kwame Owusu and the CEO of the South Africa Maritime Safety Authority (SAMSA), Mr. Sobantu Tilayi also informed AMAG members of their planned meeting with the IMO Secretary General, Mr. Kitack Lim aimed at pushing for greater African representation in the Council and Secretariat.

Dr Dakuku also disclosed that Executive members of AAMA have scheduled a meeting with African Union commission leadership to deliberate on how best to harness the continents maritime potentials using international regulatory instrument.

Speaking on behalf of her colleagues, the Alternative Permanent Representative of Ghana to IMO, Azara Prempeh who is the chairperson of AMAG commended the AAMA delegation for the meeting and urged Heads of African Maritime Administrations to domesticate and enforce Laws to deter illegal migration through the seas.

Azara informed the AAMA delegation that Africa’s representation within the IMO Council and the Secretariat staffing does not reflect the numerical strength of African states membership in IMO, urging them to work as a block to influence a change of policy in favour of the African continent.

“Heads of Maritime Administrations should engage the Africa Union (AU) to give maritime affairs the deserved  priority attention in its structure. We also need proper implementation of the  Yaounde Code of Conduct  that has to do with maritime security in West and Central Africa, the Lome Charter,2050 Africa Integrated Maritime Strategy (AIMS) ,AU agenda 2063 and other instruments accented to by African leaders to fast tract the development of the continent’s maritime potential” she said.

It would be recalled that AAMA recently had its 3rd Conference in Nigeria where the Association elected a new chairman Dr. Dr Dakuku Peterside of NIMASA to drive the proceedings of the body.

The association is charged with the responsibility of assisting and enhancing the capacity of Maritime Administrations in Africa in the adherence and implementation of IMO instruments.

AfDB to invest $24 billion in agriculture in Africa – Adesina