The youth unrest which started like play on October 8th in the commercial hub of the country, Lagos, tagged as protest against police brutality and the excesses of a unit known as the Special Anti-Robbery Squad (SARS) in the Nigeria Police Force was peaceful not until October 20th that it was turned bloody and has since spread to all the major cities in the country. 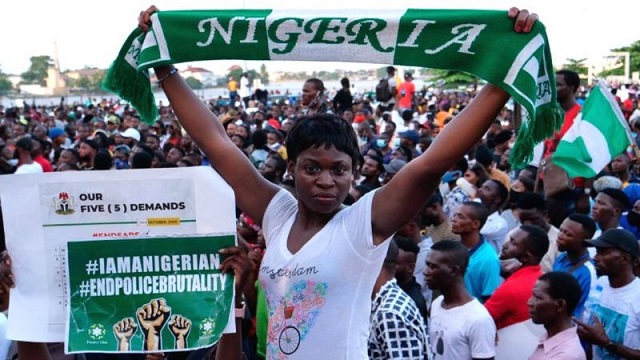 Although the protests #ENDSARS BRUTALITY were initially limited to online media, it extended to physical demonstrations and closure of roads across the country while the scope of demands expanded to cover reformation of the entire police force and better governance practices. In recent times, there have been reported cases of hoodlums hijacking the protest for personal gain.

This has heightened concerns about the degeneration of the protest and the attendant impact on gains earmarked since the re-opening of the economy in May. After show of seriousness of the youth, some state governments have begun to impose curfews to douse the tension and restore law and order.

In this report espouse the views on the likely impact of the ongoing social unrest on the economy and the markets. For instance, fourth quarter 2020 Nigeria Gross Domestic Products (GDP)’s real would contract by 3.90% year on year. Contraction, May Be Deeper if Curfews are prolonged before the protests and with the unrest and curfews put in place by different states; the front wheels of economic activities have been deflated. This has added pressure to the slow recovery process predicated on the persistent FX liquidity constraints, improved compliance with OPEC oil production cuts and general low level of business activities (indicated by the PMI).

Expert is of the opinion that there will be re-introduction of restrictive measures by state governments in response to the ongoing social unrest to drag on the economy. Accordingly, it was estimated that Nigeria’s economic output will contract by 6.91% year on year in fourth quarter 2020, translating to negative growth of 4.15% year on year in 2020 Full Year (Previous forecast: -3.32% y/y) which is two months away. However, they note that the economic impact is likely to be more severe if the unrest and curfew persist beyond the month of October. The transportation, trade, and manufacturing sectors are expected to be the hardest hit. On transportation, we expect reduced domestic and international flight operations pending when normalcy is restored.

Similarly, compliance with curfew directives to hinder the free movement of people and goods across the country, will further compounds the woes of the transport sector which is yet to recover from the COVID-19 induced decline. While the manufacturing sector is currently being hampered by FX related issues and an unfriendly business environment, the imposition of curfews will further exacerbate the challenges of the sector.

For the trade sector, the decline in household consumption brought about by higher food prices and shrinking has recorded.  According to analyst(s), Abdulazeez Kuranga and Gbolahan Ologunro gbolahan at Cordros Research consumers’ income will cascade into weak wholesale and retail trade in conjunction with the pre-existing supply chain constraints. While inflation: No Respite In Sight for Consumers Based on our market survey, there were no major increases in prices of goods and services between October 8th when the protest started, and October 20th when the Lagos State Government imposed a 24-hour curfew.

Although there has been reduced movement of citizens, goods, and services in the last one week due to the growing intensity of the protest, qualitative data from respondents showed that the impact on the pricing of goods and services has been somewhat muted. In our view, the ongoing social unrest will not impact domestic prices significantly in the short term. However, the impact could be aggravated if curfews become prolonged.

Consequently, it was of the opinion that the impact will be lagged and thus will influence the headline inflation in November. This is supported by their expectations that the current average stock can partly offset increasing demand for the next 5 days, after which the widened supply-demand gap in remaining days of the month will not be significant in stoking price pressures for October. As such, they maintain their inflation forecast for October at 1.51% m/m, translating to 14.21% y/y.

Over the rest of the year, we expect the lagging impact of the October unrest to translate into increased prices of goods and services in November due to the disruptions at the Lagos ports and as households stockpile commodities in expectation of another lockdown. As such, we expect the year-on-year inflation rate in November and December to print 14.80% and 15.58% respectively, implying average inflation of 13.19% for 2020FY.

Social Unrest Unlikely to Materially Dent Appetite for Stocks Social unrest creates fear and uncertainty in the mind of investors who are concerned about safeguarding their assets and protecting themselves from any possible fallout of the unknown. With the degeneration of the ongoing protest into social unrest, we anticipate a knee jerk reaction from investors, which may dovetail into a wider market sell-off especially if the unrest does not show signals of dissipating. We, however, note that the bearish run is unlikely to be prolonged due to the lingering liquidity constraints in the FX market which will hamper selling activities by FPIs. On the other hand, domestic investors seeking alpha yielding opportunities in the face of increasingly negative real returns in the fixed income market are likely to pick up stocks at attractive entry points.

The performance of the local bourse in yesterday’s trading session offers insight into this – the All Shares Index (ASI) of the Nigerian Exchange was down by 1.42% by noon with offers outstripping bids on most counters as investors were spooked by the heated climate. However, investors took advantage of the sell-offs by picking stocks at attractive entry points which pared losses for the day and moderated the loss to 0.75% by the close of trading. We, however, note that Foreign Portfolio Investments (FPI) will likely remain on the sidelines for longer as investors adopt a wait-and-see approach amid elevated currency risk. As a result, the scope for fresh inflows from FPIs through the I & E window appears limited.

Consequently, we see no respite for accretion to the CBN’s external reserves amidst lower oil sale receipts. Thus, we expect the Central Bank of Nigeria (CBN) to intensify its FX demand management and capital control strategies to stem exchange rate pressures on the local currency. Sequentially, the gap between the official window and parallel market rates will persist. More Damage to Foreign Direct Investment For a less stable economy like Nigeria, assessment of social conflicts by potential investors will be a key consideration. Typically, investors gear their foreign direct investments toward economies where they have the highest potential for profit and the least risk. As such, the dent of the social unrest to the image and perceived risk of long-term capital investment would mean that the country will struggle in attracting the much-desired long-term finance needed for accelerated growth and enhanced job opportunities. Against this backdrop, we do not expect divergence from historical trends where FDI has a negligible contribution to the overall capital importation into the country – FDI contributed an average of 12% to total capital importation between Q1 2014 and Q4 2019.