Policy makers must understanding between the innovation-led enterprises and that of small and medium-sized enterprises (SMEs), as the two are completely different from one another, argues former Flutterwave CEO and venture capitalist Iyinoluwa Aboyeji. 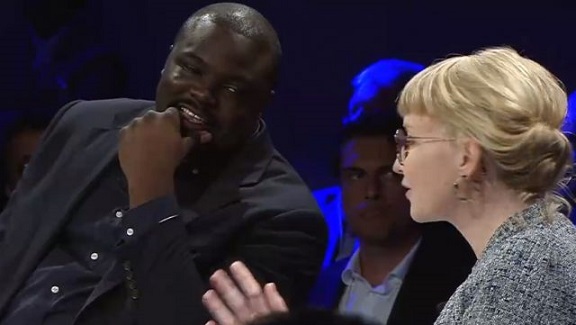 Aboyeji was speaking last Wednesday (4 September) during a panel discussion at the World Economic Forum (WEF) on Africa which was held in Cape Town.

The discussion was led by The Wall Street Journal’s Gabriele Steinhauser (pictured above, left in a screengrab from the video and see the below video of the session, with Aboyeji’s comments at 14.52).

Aboyeji helped co-found US-based fintech Flutterwave in 2016 before leaving the company as CEO in October last year. The startup last year closed a $10-million Series-A extension round bringing the total amount the startup has raised since its launch two years ago, to just over $20-million story.

In the discussion, the Nigerian-born entrepreneur said policymakers need to more clearly distinguish between innovative companies and SMEs, if they are to create the next Facebook.

“As an entrepreneur my background is basically taking companies from zero to 100 million in a three-year period and it’s possible I’ve done it two times in Africa and I’ve seen it done multiple times.

“And the frustration of someone like me is that the topic of the panel is ‘From Startups to Scale-ups’ and we’re talking about SMEs, and they’re very different.

“There are two kinds of businesses. SMEs and innovation-led enterprises. They’re not the same.

“Facebook is not an SME. If you’re trying to build Facebook in your country and you’re developing policies to help SMEs, you’ll get fantastic SMEs which South Africa has, but you will not get Facebook. Because giving 30% of government business to Facebook will not make it a billion-dollar company.

“And this is what everybody has to understand. Because when we keep mixing up SMEs and ILEs (innovation-led enterprises — Ed), we get the results we optimise for and then we get frustrated because it feels like it’s not working.

“But it’s working you’re getting SMEs, tenderpreneurs, they’re SMEs. Yes, they go and sell you what you need to get and that’s what they do. But they’re not going to invent anything, they’re not innovators.

“That’s the first thing we need to understand, they’re not the same thing.”

Aboyeji says any country that wants to build innovative companies needs to develop the necessary talent and ensure that learners have access to the technical skills necessary for the future.

He has a strong point. While SMEs on the continent need support, isn’t it time for African policymakers to develop particular policies to foster innovation-led firms?

Like this, African countries could better develop the innovative solutions the continent needs for more Africans themselves to help solve the many challenges that Africa continues to face