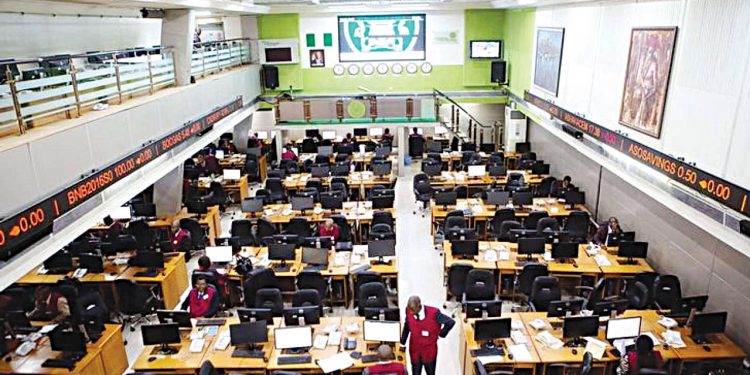 Many investors are in jitters as sustained losses depressed the share prices of most quoted companies to their lowest values in more than a year.

Benchmark index at the Nigerian Stock Exchange (NSE) indicated average year-to-date return of -11.17 per cent, 139.7 per cent increase on average decline of -4.66 per cent recorded by the first half of the year ended June 30. The stock market had traded negative in six of the seven past trading sessions, causing panicky investors to invoke open market orders and dump stocks at lower prices.

Despite the onset of the first-half earnings season, several large-cap and mid-cap stocks also closed around their lowest prices in a year, including NSE’s largest capitalised stock, Dangote Cement Plc and most capitalised financial institution, Guaranty Trust Bank.

The steep decline in shares prices among active large and mid-cap stocks had compounded the precarious market situation, which had seen about one-third of quoted companies stagnant around nominal values and unable to recover since the 2008 market crash.

While most analysts agreed the current market situation presents good opportunity for long-term investors, most also remained cautious about the immediate to short-term outlook.

“In the coming week, we believe the bearish performance will be sustained despite attractive prices in fundamentally sound stocks as poor first half 2019 earnings results do little to spur investors’ interest,” Afrinvest Securities stated at the weekend.

Cordros Securities reiterated that its “outlook for equities in the short to medium term remains conservative, amidst the absence of any catalyst to drive positive market returns”.

The Association of Securities Dealing Houses of Nigeria (ASHON) at the weekend urged investors to shun panic and exercise restraint to avoid avoidable losses as the stock market would soon rebound.

Reacting to continuing decline in share prices and massive sale of shares on the NSE, ASHON Chairman Chief Patrick Ezeagu described the situation as unnecessary panic sale. According to him many investors adopt herd instinct whereby they sell off just because others are selling.

Ezeagu noted that two investors may not necessarily have the same motive for sale or buy order, saying this is where the need for professional investment advice from stockbrokers become compelling.

He stated that a trend analysis of corporate earnings in recent time indicates that many companies across sectors have posted higher earnings with good returns but this has not significantly reflected in the upward movement of their share prices.

Ezeagu explained that there was nothing unusual about this as the market generally reflects the trend in the economy, hence, investors buy into the future of these companies on the expectation of higher shareholder value.

“Those who are selling off their shares right now are speculators and not real investors. Every stock market needs speculators for liquidity but they can change investment decision in one second.

“Our stock market is forward looking. Investors need not be nervous. They should consult professional stockbrokers for sound investment decision. There is no basis for panic sale of shares. Many companies have announced strong financial performance with prospects of increased future earnings. Why should a shareholder of such a company embark on panic sale of shares?

“Globally, stock market gauges the mood of the economy like a barometer. Our market is not a local one. Foreign investors have significant stakes because their analysis has always convinced them that our market has potential for strong Return on Investment (RoI).

“At the moment, core investors are awaiting a couple of things, including announcement of ministers and the Economic Team to show the clear direction of the government.

“These are issues that are beyond the board and management of the Exchange but have dire consequences on investment decisions. The bearish trend has to do with the fact that the government is yet to settle down after the elections. However, astute and professionally guided investors should take position now that most stocks are trading lower than their net realisable asset value and expect handsome returns when the market shall eventually rally.

“A mere study of most of the companys’ performance figures is most informative and points in the direction of a market that will definitely rally as soon as the economic team of government is in place,” Ezeagu said.

‘Shareholders key to our business