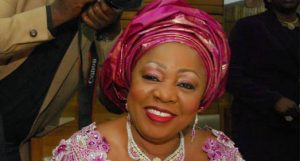 A former presidential adviser, Senator Florence Ita-Giwa, has said that the ratification of the Paris Agreement on climate change by President Muhammadu Buhari was a step in the right direction.

The President had on Tuesday signed the instrument of ratification of the agreement after initially signing the first draft in September 2016.

The Paris Agreement (French: Accord de Paris) is an agreement within the United Nations Framework Convention on Climate Change dealing with greenhouse gases emissions mitigation, adaptation and finance starting in the year 2020.

In a statement, Ita-Giwa noted that now that the agreement had been signed, there was the need to urgently embrace its implementation.

She said implementing the agreement was of utmost importance to Nigerians, especially the people of the South-South, which according to her is prone to environmental changes.

“We are now appealing to ensure that the agreement is immediately implemented. Implementing the agreement should indicate all the catastrophes that have caused climate change.

“The Niger Delta region is a rich in coastal environment that is highly prone to adverse environmental changes.

“These changes are occasioned by climate change, such as sea level rise, coastal erosion and many decades of oil pollution leading to loss of livelihoods and ecosystems. The implementation of this agreement will save the world and preserve lives.”