With a wide genre of relevant and entertaining programmes to choose from, subscribers to GOtv can look forward to an exciting weekend. 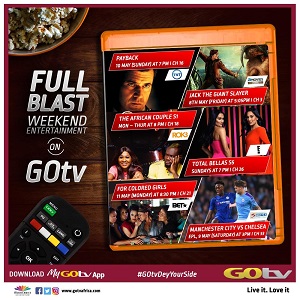 And in case you missed it, MultiChoice is offering up to 75% discount on subscriptions on GOtv Jolli, Plus, Jinja, Value and Lite. Reconnect or stay active on your current package and get upgraded to the next higher package.

The African couple S1 airs on ROK 3 (channel 18) Mondays – Thursdays at 8pm. A newlywed couple struggles as the wife is the bread winner and her husband is an unemployed afro beats star in the making.

Brand new series alert, Killing Eve S1 airs Wednesdays at 7:45pm on FOX (channel 19). This show centres around two distinctly different women. Eve is a bored, whip-smart MI5 security officer whose desk-bound job doesn’t fulfil her fantasies of being a spy. Villanelle is a mercurial, talented killer who clings to the luxuries her violent job affords her.

The kids can join in on the crazy adventures of Oswaldo S1 Is airing on Cartoon Network (channel 67) Saturdays at 4:45pm. An ingenious and dreamy penguin with an innate ability to transform any daily situation into an unforgettable adventure.

Catch all 13 episodes of The Palace S2 airing on ROK 2 (channel 17) Saturday 9th May from 8pm and Sunday, 10th May from 8:30am. A crown Prince who defies the King’s marriage advice, due to his hatred for women which sprang from the stigma of his late mother’s infidelity.

Catch this action-packed film, Payback airing on TNT (channel 16) Sunday, 10th May at 7pm. A former gambler gets lured back into the underbelly of illegal gambling and must fight for his life.

Total Bellas S5 airs on E! Entertainment (channel 26) Sundays at 7pm. This show gives you an insight on the lives of WWE Divas from their work within WWE to their personal lives.

For coloured girls airs on BET (channel 21) Monday, 11th May at 8:30pm. Each of the women portrays one of the characters represents in the collection of twenty poems by Ntozake Shange, revealing different issues that impact women in general and women of colour.