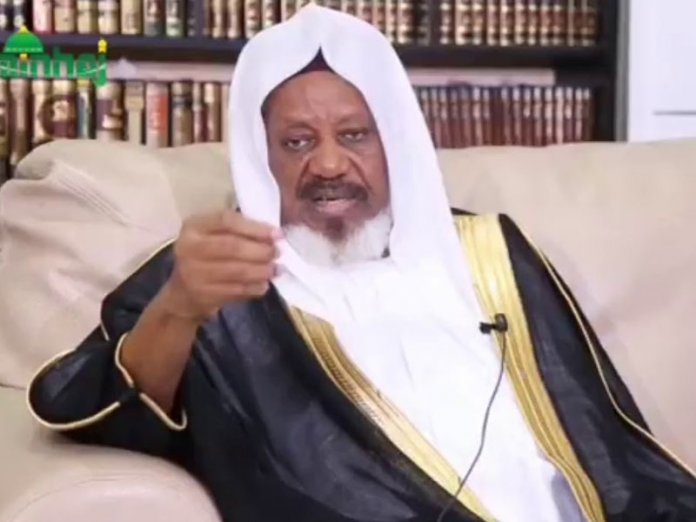 The Fatwa Committee of the the Jama’atu Nasril Islam (JNI), headed by Sheikh Sheriff Alhusainy, has directed that Eid-el-Fitr congregation in the outskirts of towns and cities should be temporarily suspended due to the spread of COVID-19.

The President General of the JNI, Sultan of Sokoto, Alhaji Muhammad Sa’ad Abubakar, who constituted the committee had directed it to
to come up with FATWA regarding the 2020 Eid-el-Fitr prayers.

The Gecretary General of the JNI, Dr. Khalid Abubakar Aliyu, in a statement on Thursday in Kaduna, said “the the committee after due consultations, as well as considerations of the current state – COVID-19 pandemic and the serious threat it poses to life, reached the following decisions:
“Eid-el-Fitr congregation in the outskirts of towns and cities should be temporarily suspended.

“That, the said ‘Eid-el-Fitr Prayer be observed at home with family members or alone in case there isn’t anyone with him or her, at home.
“That the ‘Eid-el-Fitr Prayers is two RAKA’AT. Seven (7) TAKBIRAT to be pronounced in the first RAKA’AT, including the opening TAKBIR. Then SURATUL FATIHA is read and any other SURAH, preferably SURATUL A’ALA.

“While in the second RAKAH, five (5) TAKBIRAT be pronounced. Then SURATUL FATIHA is read and any other SURAH, preferably SURATUL GHASHIYAH.
“In the case of praying at home, as it may be, the KHUTBAH(sermon) is suspended.

“All above mentioned are based on the Hadith of Anas Bn Malik in Sahih al-Bukhari and Maliki School of law decisions, in MUKHTASAR, as explained by Al-Kharshi and Al-Munah al-Jalil”.

The statement however said “states where governments have reached concrete decisions to observe the ‘Eid-el-Fitr prayer, based on their medical experts advice, strictest measures of distancing, face masks and sanitizers be taken to protect worshipers.”

The statement added that in this case neighborhood mosques can be utilized if it becomes necessary.

The statement urged that “Ulama should fear Allah, the Most High and be matured enough in guarding their utterances and actions for the overall interest of the DEEN and the Ummah”.

The statement therefore, called on Nigerian Muslims “to reflect their minds to the good virtues of the month of Ramadan and keep to its teachings all through their respective lives, as the Lord of Ramadan, is still and shall remain The Lord of other months, above all keeps the records of our actions and inactions.”

“More so, Muslims are reminded to keep to the ordinances of the Glorious Qur’an, for the prestige of the Muslim Ummah.

“JNI wishes all Muslim faithful an accepted Ramadan Fast and successful ‘Eid-el-Fitr. In the same vein, Muslims are urged not to forget the Sitta-Shawwal, i.e the six-days recommended fasting, that follows Ramadan Fasting as recommended by the Prophet Muhammad (SAW)…:” the statement said.