Joshua produced the performance of his career to stop his Ukrainian counterpart with an enthralling knockout in front of a record 90,000 audience at the Wembley Stadium. It was the culmination of a close contest that saw Joshua dropping Klitschko in the fifth round, before being put down – for the first time in his 19-fight career – in the sixth.

Both men looked in danger of being stopped over two rounds which will live long in the memory, before Joshua delivered the clinical blows in the 11th. The Briton landed a brutal uppercut which gave him the platform to send Klitschko down with an immediate flurry.

Klitschko stood, but was again dropped by a left hook moments later, and then stood again, only for referee David Fields to save the challenger when pinned against the ropes.

Joshua threw his arms into the air as roars rolled down the Wembley tiers. He had come through his stiffest test to date, while Klitschko had answered questions of his own, showing he remains competitive at world level, even at 41.

The Ukrainian known as Dr Steelhammer will regret not finishing the job when he floored Joshua and appeared close to reclaiming two of the titles he lost in his last fight against Tyson Fury in 2015.

“What can I say? 19-0, three and a half years in the game,” said Joshua. “I’m not perfect but I’m trying, and if you don’t take part, you’re going to fail. As boxing states, you leave your ego at the door and you respect your opponent. So a massive shout-out to Wladimir Klitschko.”Analysis – ‘Those punche

In the process of claiming the biggest win of his career, Joshua showed amazing resilience, and this was, by far, his most impressive performance. He took the best punches from Klitschko (64-5), and survived to knock out a future Hall of Famer.

After the fight, Klitschko wouldn’t confirm that he would take a rematch — neither, for that matter, would promoter Eddie Hearn — but he was complimentary of his opponent. 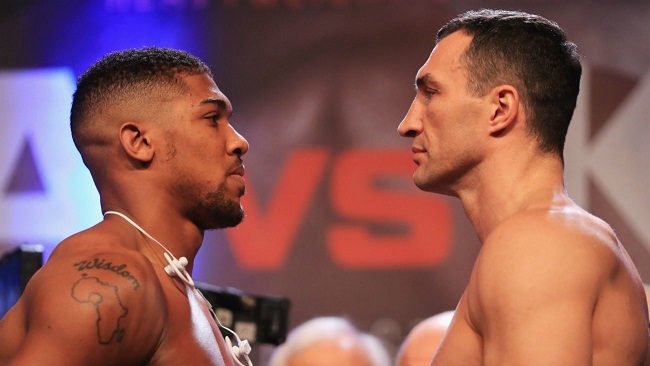 “The best man won tonight, and it’s an amazing event for boxing,” Klitschko told Sky Sports after the fight. It’s really sad I didn’t make it tonight. I was planning to do it. It didn’t work.”

A rematch would be great for Joshua, now that he knows he can beat Klitschko. He also showed he could take massive punches from one of the best heavyweights in history, and even if after falling to the canvas, got up to win.

“It’s boxing. I’m only going to improve,” Joshua told Sky Sports. “Sometimes you can be a phenomenal boxer, but boxing is about character. When you go to the trenches, that’s when you find out who you really are.”

It is not yet clear if the option of a rematchas stipulated in the contract of the fight will be taken. However, lying in wait asfuture opponents are for champion, Tyson Fury and the holder of the WBC heavyweight belt Deontay Wilder.