The President of Nigeria’s Court of Appeal, Honourable Justice Monica Dongban-Mensem and the Administrator of the National Judicial Institute (NJI), Honourable Justice R.P.I Bosimo, OFR (Rtd) at the weekend called on the Nigerian judiciary to realise the need for speed in dispensing cases involving the Asset Management Corporation of Nigeria (AMCON) and its recalcitrant obligors that come before their honourable courts. The duo however maintained that that justice must be dispensed within the ambit of the law. 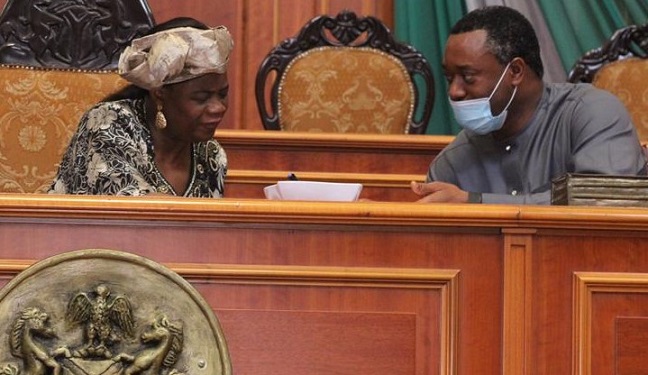 L-R: Nigeria’s President of the Court of Appeal, Hon. Justice Monica Dongban-Mensem in a discussion with Dr. Eberechukwu Uneze who represented the Managing Director/Chief Executive Officer, AMCON, Mr Ahmed Kuru on the second and final day of the Seminar at the Ceremonial Hall,

Court of Appeal, Federal Capital Territory (FCT), Abuja…at the weekend Similarly, Mr Ahmed Kuru, Managing Director/Chief Executive Officer, AMCON also reiterated the fact that AMCON, which presently has pilled-up legal issues in different courts with its obligors said non-collection of the debts, which is in the excess of N5trillion would have negative effect on the national resources.

Kuru was however appreciative of the Nigerian judiciary for sustaining the AMCON Task Force in the four divisions of the Court of Appeal to ensure a fast track of AMCON appeals. The AMCON CEO said no one can over flog the important role the judiciary plays in National Development meaning that the judiciary remains vital to the success of AMCON.

Presently AMCON owes more than N4trillion to the central Bank of Nigeria (CBN), which could even rise to almost N7trillion by 2024 at the current rate of inflation, which is why there is a dire need for all sister agencies of the Federal Government of Nigeria to join forces to ensure that the economic saboteurs who intend to cripple the banking sector before AMCON was set up are compelled to repay the humongous debt that is weighing down the Nigerian economy.

The justices and the AMCON CEO were speaking at the just concluded 2-day Annual Seminar for Honourable Justices of the Courts of Appeal, which started on Friday in Abuja. The event, which ended late on Saturday was jointly organised by the National Judicial Institute (NJI) and Legal Academy (LA) with the full complement of AMCON management in attendance.

While welcoming participants to the seminar, Justice Bozimo who threw more light in the expectations of the judiciary, which she argued will enable AMCON is to succeed said, “The role of the judiciary in the execution of AMCON mandate cannot be overemphasised. This is understandable considering that the distinguished bench is indispensable to the realisation of the enormous powers conferred on the Corporation by the AMCON Act.

“It is through these interactions that the judiciary will be sensitised on the complex role AMCON plays at ensuring the sustenance of the financial system stability in Nigeria. The level of financial stability currently enjoyed in the country is solely attributable to the role played by AMCON in offloading toxic portfolios from the balance sheets of banks thus enabling the banks to perform their intermediating role in the macro-economy.”

Standing front row (4th from right), Hon. Justice Monica Dongban-Mensem; MD/CEO AMCON, Mr Ahmed Kuru (3rd from right) and other Justices, staff of National Judicial Institute (NJI) and AMCON among other participants in a group photograph at the end of the opening day of the seminar

According to her, viewing the peculiarities, uniqueness and the unconventional nature of the AMCON regime, it is evident that AMCON is bound to confront challenges and difficulties in its daily efforts to realise its mandate. Justice Bozimo added that it was in order to assuage these challenges that the National Judicial Institute ensures that the judiciary especially the Hounourable Judges are sensitised and provided with updates that have to do with the AMCON regime at all times.

Furthermore, she said, “AMCON intervention in the economy at the time it was set up by the Federal Government ensured the integrity of banks and saved their employees from sudden and untimely disengagement. In other words, with the establishment of AMCON, Nigerian banks were saved from imminent collapse and their employees secured from retrenchment.”

In her own address, Justice Dongban-Mensem while welcoming participants to the seminar also recalled that the 2007-2009 global financial crisis had severe impact on the economies of many countries, including developing economies like Nigeria’s, which was why AMCON was set up. She said that the Corporation having made sure that the financial system in Nigeria did not collapse, now was the time for all sister agencies of government to ensure AMCON recovers its outstanding huge debt from its recalcitrant obligors who incidentally are exploring judicial technicalities to hold on.

She said, “Although Nigerian banks were restructured prior to the financial crisis through consolidation, the restructuring did not shield Nigerian banks from the effects of the crises. In fact, the crisis further exposed other lapses in the system that needed to be addressed in order to prevent total collapse. The Nigerian government responded by establishing AMCON to help in stimulating recovery of the Nigerian banking system through buying non-performing assets of troubled bank.

“Eight factors were primarily responsible for the   crisis in Nigeria. They include macro-economic instability caused by large and sudden capital inflows, major failures in corporate governance in banks, lack of investor and consumer sophistication, inadequate disclosure and transparency about the financial position of banks, critical gaps in regulatory framework and regulations, uneven supervision and enforcement, unstructured governance and management processes at the CBN/and weaknesses in the business environment.”

Insisting that the judiciary must support AMCON to recover the debt, Justice Dongban-Mensem added, “In the wake of a financial crisis, banks found themselves saddled with plethora of defaulting loans. In addition to causing default, the crisis typically led to depreciation in the value of securities created against these defaulting loans thereby leaving banks with an unfortunate inability to recoup their losses. Having tied up large amount of capital in Non-Performing Loans, and having lost confidence in the ability of the borrowers to repay the debts, banks were unable and possibly unwilling to maintain the level of lending required to maintain a vibrant economy. This in turn led to higher interest rates and an inability to perform the bank’s basic function of financial intermediation i.e. the pooling of savings and lending for some interest rate returns.

Standing front row (2nd from right), Hon. Justice Monica Dongban-Mensem; MD/CEO AMCON, Dr Eberechukwu Uneze, Executive Director, AMCON (1st from right) and other Justices, staff of National Judicial Institute (NJI) and AMCON among other participants in a group photograph on the final day of the seminar

“Sequel to the crisis and domestic events, the federal government of Nigeria through the operation of Central Bank of Nigeria (‘CBN’) conceptualized the idea of establishing the Asset Management Corporation of Nigeria as an institution that will prevent the looming financial crisis in the country. Thus, the Corporation was constituted pursuant to the AMCON Act 2010, to prevent the systemic collapse of the Nigerian banking sector by the acquisition of -Non-Performing Loans (NPLs) and the recapitalisation of banks, which were imminent to fail.

“I wish to specifically acknowledge the zeal, passion and tenacity of the Managing Director/Chief Executive Officer of AMCON-Mr. Ahmed Kuru in constantly engaging the judiciary of the uniqueness of AMCON and the imperatives of the judiciary to appreciate the peculiarity. I wish to assure AMCON of our sustained support within the ambit of the law. It is compelling to acknowledge that AMCON ensured that the country has succeeded in escaping from the collapse of a bank, a run on a bank, or the need to withhold depositors’ funds. Accordingly, the Corporation deserves the sustained support of all the Arms of Government so that this monumental accomplishment will be insulated from fragmentation,” she concluded