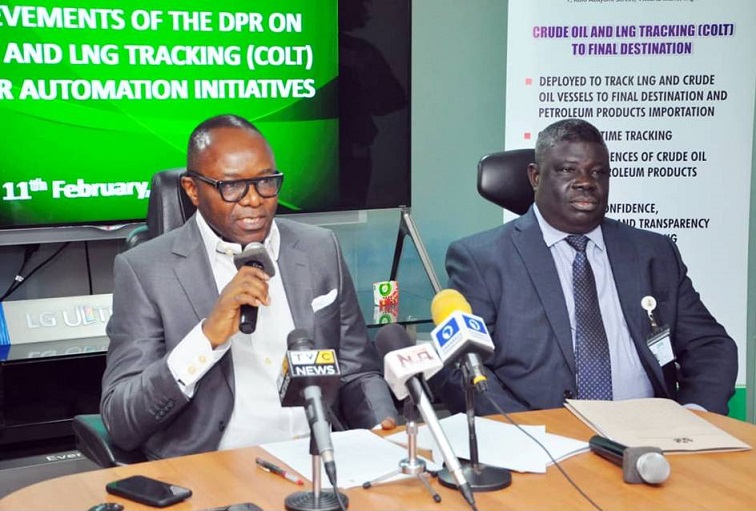 Kachikwu gave the commendation during a Ministerial briefing on the achievement of the agency and commissioning of the automated software in Lagos.

The minister said that essence of the initiatives was to be able to track crude oil productions and vessels on the onshore and offshore of the country’s water ways.

“That his clear mandate as a Minister of State, is to try and change the oil industry, because we were deeply worried about what was looking like a value dip in terms of the reputation of the oil industry and some of the issues of corruption that were all over the place.

“Whilst we are celebrating a whole lots of things that we have done the 7-Big Wins, NNPC restructuring, the cash call issues, subsidy removal at some points, the reality is that DPR has been a regulator that has been working very hard and when they eventually got to the milestone that we have today.

“I said to them, let the people come out and know what they have been doing over the last couple of years.

Kachikwu said: How we ensure that every monies that is collected in this sector is tracked and goes straight into the federation account, one of the problems we have is that what quantity of crude we produce, how much are the leakages.

“We have rolled around this for decades and I told them I want us to be able to tell Nigerians everyday what we produce with some certainties.

He said that today,  the agency have been able to track production, track the movement of that production, following these initiatives had launched series of IT based platforms and interventions which had  Nigerians into the next foray of how oil companies and oil operations in this country should run.

According to him, the few interventions that we have had include: National Production Monitoring System (NPMS) which focus includes using online to gather data. We have been able to track online/real time data of what our productions are and so we are now in the position to say what is the production done by this country.

“All our fields are largely tracked online now and what it means is that we can actually feed the nation on what was our actual production and from which fields and what is the volume and also identify if there are leakages.

“We have also had the COLT which is basically tracking of crude oil and LNG. It is just not enough to produce, but to know where it is going to. As you know, some of our problems is both accounting for production and what happened to crude oil produced,’’ the Minister added.

Kachikwu said that what COLT does for Nigeria was to be able track any of these vessels be it LNG or crude and track where it is going, adding that Nigeria can also track those vessels to the point of discharge.

He said that the Accelerated Lease Renewal Program (ALRP) was put in place in 2015 for the purpose of creating revenue for the government, adding that In 2015/2016, our revenue was very down and the whole idea was find money and reduce loans.

“We reviewed the fees payable for renewals by 50-100 per cent, and we are able to renew quite a number of fields.

“The last is the royalty indebtedness recovery which is largely pushed by the Presidency that we must recover a lot of royalty that was outstanding by most of the players in the field.

“The process of determining royalty in the past was largely driven by initiatives of oil companies that determine what they produce and we calculate the royalty based on their own figure.

“But now, we have been able to use the system we have now to see what the actual productions are,’’ he said.

He said: under the rule, you do not get your renewals unless the outstanding royalties are paid. For those that have shown the seriousness and mapped out how they intend to settle their indebtedness, we will review, but we will not  give out the final certificate until you have settled and this has generated about N2 trillion so far as a result of this royalty recovery scheme.

“It is one thing to set these policies, it is another to have the agency in charge to work assiduously within the time you set for them and achieve results. I congratulate Director of DPR and his team.

In his remarks, Mr Mordecei Ladan, the Director of DPR lauded the minister’s support towards rebranding and reshaping the agency in ensuring improved services delivery in the oil and gas sector.

According to Ladan “The minister has been involved in these projects, so we call him to come and engage the media in showcasing some milestones that have been achieved by the regulatory agency of the petroleum ministry.

“ As you have heard, several milestones have been scored by this agency, we have had instances for which we showcase some of them but there are others that the minister has been very impressive with, we decided to bring the minster here to discuss these milestones with the media.

`Showcasing some of the aspirations of this government since inception and since the period he has became the minister, he has challenged us and we equally have been challenged and in tackling the challenges.

“We also ensure that we meet these aspirations to take the oil and gas industry to the next level,’’ he said.