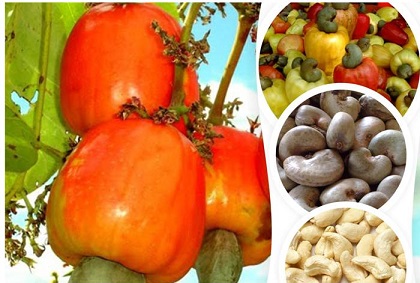 According to the records, Nigeria is currently processes only about 10% of the raw cashew nuts produced in the country. The rest of the nuts find their way to Asia and other countries where they are processed and exported back to Nigeria as finished and packaged cashew kernels.

Harvest of mature cashew fruits takes place between February or early March up till April. The entire harvest period occurs in approximately 16 weeks. RCN (Raw Cashew Nuts) trading begins from March up till June (beyond June for stored RCN).

After harvested of the raw cashew nuts are usually bagged and stored in Jute bags to prevent post harvest losses and ensure proper storage.

The record showed two major qualities analysis that usually ensures that Cashew nuts are up to the required standard and that kernel and nuts are within international specified standards.

The Nut Count test; It is the number or raw cashew nuts per kg. From the 1kg sample you picked randomly from bags, count how many nuts you have in that 1kg.

Cashew is an agro export crop and the major buyers of the Nigerian Raw Cashew Nuts are Indian, Vietnam, Singapore, Dubai, and other European countries.

In Kogi state, Cashew is currently being cultivated for its kernel, a repository of all classes of nutrients which is traded world-wide.

Nigeria is one of the top ten Raw Cashew Nut (RCN) producing countries in the world the third largest producers in Africa after Cote D’voire and Tanzania.

There is no general standard measure for cashew nuts but some parameters can establish the quality of the cashew and the appreciation on the market.

The shell of the cashew seed yields derivatives that can be used in many applications from lubricants to paints.

In confectionery and bakery products, for example, finely chopped kernels are used in the production of sweets, ice creams, cakes and chocolates, both at home and industrially and as paste to spread on bread.

Recently Minister of Agriculture and Rural Development, Audu Ogbeh, said that the country would start processing its raw cashew nuts for export by 2019.

Ogbeh made this known at the maiden edition of the 2017 First Bank Agric Expo in Lagos.

The expo is tagged: Reinventing Agriculture for Sustainable National Development.

According to him, the current worth of a tonne of roasted or processed cashew nut for export is $10,000 while the raw cashew nut is sold for $1,200.

He said it would be better to process the nuts for export instead of exporting raw cashew nuts in order to benefit from the high cost of cashew nuts.

“So in the next two years we will no longer export raw cashew nuts, but roast the cashew nuts for export.

“If we produce a tonne of roasted cashew it will be sold at the international price of $10,000, whereas a tonne of raw cashew nuts sells for $1,200.”

Ogbeh also said that Nigeria shipped a total of $600,000 worth of raw cashew nuts to Vietnam alone in 2016.

Pitan To Head Bank of Industry; Doherty To Head PenCom