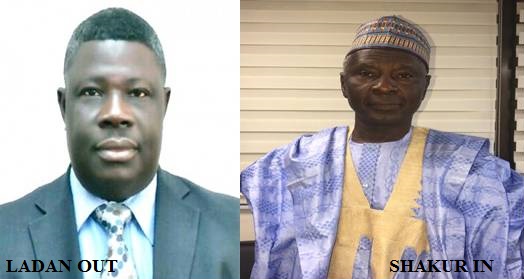 Following the expiration of the tenure of Mr. Mordecai Danteni Baba Ladan as the Director of Petroleum Resources, and in line with the provisions of Circular Ref. No.SGF.50/S.II/C.S/268, the former Director has formally handed over the affairs of the Department to the most senior officer Mr. Ahmad Rufai Shakur, the Deputy Director and Head, Corporate Services Division in an Acting capacity.

Ladan tenure end June19, 2019 after four years as Director of Petroleum Resources and 32 years in services with department of petroleum resources

Mr. Mordecai Danteni Baba Ladan, was appointed as Director of the Department of Petroleum Resources, DPR, after tenure of Mr. George Osahon whose tenure elapsed June 19, 2015.

Ladan, according to the information, is a Petrochemist by profession, who joined DPR on November 23, 1987 as a Senior Analytical Chemist and was deployed to the Safety & Environment Branch under the then Technical Services Division. The company noted that Ladan rose through the ranks to occupy various key positions within the organization, including Zonal Operations Controller, DPR Kaduna.

Mr Shakur comes on board with over 32 years experience in the oil and gas industry with very robust service records in the regulatory arm of the sector.

According to the statement signed and released by HEAD, PUBLIC AFFAIRS disclosed that the new Acting DPR is a graduate of the Ahmadu Bello University with a Master of Business Administration degree. Mr. Shakur has held various positions across the value chain of the DPR from the zonal offices to headquarter and has attended numerous management and leadership courses locally and internationally in notable institutions worldwide like the Columbia Business School, New York USA and Wharton Business School, Pennsylvania, USA

Embodied with renowned past records in strategic leadership, corporate governance and optimal performance, Mr Shakur is expected to steer the Department to the next level.