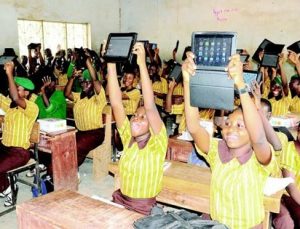 The third edition of the Lafarge Africa National Literacy Competition comes to an end with Lagos State contestants emerged winners out of five others.

The Lagos contestants emerged after beating their counterparts from other regions; Plateau, Gombe, Enugu, Edo, Abuja at the grand finale which was held on November 17, 2016 in Lagos.

It engages pupils in activities that measure and advance their ability to read, write and spell correctly. It also features literacy tests, essay/summary writing and spelling bees to evaluate their reading and writing abilities.

Commenting on the success of the competition, the group MD/CEO, Lafarge Africa Plc, Michel Puchercos stated that the organisation continues to provide support and interventions in education as part of its core areas of social investments in furtherance of its commitment to building a greater Nigeria.

Puchercos noted that the competition is one of the national social investment programmes developed by the construction solutions giant to take corporate social responsibility beyond her host communities to a wider Nigerian audience.

“Our motivation is to continue to provide support and interventions in the area of education as a focus area for our social investments to demonstrate commitment to building a stronger Nigeria”, he said.

Puchercos expressed that the company’s contributions to literacy in Nigeria are geared towards achieving its goal of creating value and delivering the best returns for all stakeholders in a consistent and sustainable manner.

In her remarks, the chairperson of Ovie Brume Foundation, Ms. Evelyn Oputu expressed that the foundation was set up to give to the society and exploit the potential of the young people who do not have the opportunity others have to further their education which is the basic of the foundation.

The first lady of Ogun State, Mrs. Olufunso Amosun, stated that the initiative is commendable because result have shown that the pupils have improved from the previous edition in terms of literacy and spelling which is as a result of the continuous effort of the Lafarge Africa Plc and Ovie Brume through the Lafarge National Literacy Competition.