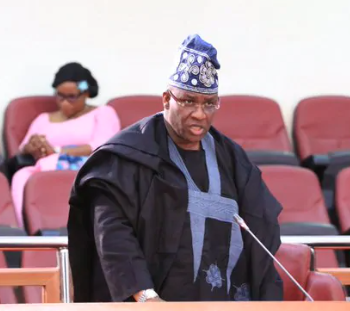 THE Chairman, Committee on Information and Strategy of the Lagos State House of Assembly, Hon. Tunde Buraimoh, is dead.

The late Buraimoh, who represented Kosofe Counstituency 2, was an active and eloquent member of the House.

Although the Lagos Assembly was yet to come out with an official statement on Buraimoh’s death or its cause, speculations within the Assembly, especially among the lawmakers, on Friday pointed to complications arising from COVID-19.

Some of the lawmakers who spoke on condition of anonymity described Buraimoh’s death as a rude shock.

One of them described the late Buraimoh as a very cautious individual whose death had caused him to be sleepless.

He said: “It is true my brother. I have not been able to sleep since 1 a.m. when I learnt about his death. He was one of people who never toyed with their health.

“He was highly cautious and would always maintain strict adherence to medical counsels from the appropriate quarters as they concern prevention of the spread of the Covid-19 scourge.

“He will be sorely missed. He was such a fine breed whose impact will ever remain a point of reference.”

Another lawmaker hinted that the late Buraimoh died of COVID-19, which he said the deceased lawmaker might have contracted from the late Senator Bayo Osinowo with whom he was a close confidant.

He said: “We have been battling it for a while now before his sudden demise. It is so sad we eventually lost him.

“He might have contracted the virus from the late Pepperito (Osinowo) with who you are much aware he was a close confidant. It is confirmed he died of COVID-19.”

Announcing Buraimoh’s death early Friday morning in a statement, the Mayoress of Ikosi Isheri Local Council Development Area, Princess Samiat Abolanle Bada, said: “Kosofe politics without you is a cold world of ice, freezing me to death like a fish stark naked.

“Your demise is not just a lonely death but a string that rubs on many as victims.

“As a bearer of law, you stood as the voice of the voiceless. Many are living testimonies to your life-touching impacts.

“Your leadership in Kosofe exemplifies the dexterity of your seasoned administrative prowess and uncommon resourcefulness in bringing good governance to the people at the grassroots.

“Your hands are always outstretched to the needy and the poor. Constantly your doors are flooded by beneficiaries of your flowing hands of honey.

“Every eye filled with sadness and sorrow received succor with the cheerfulness of your face.”

He was buried at the Ikoyi Cemetery, on Friday.

No going back on petrol subsidy removal – FG