Kindly Share This Story:
Four days after it recovered the wreckage of a Bell 206 B 111 helicopter that crashed in the Opebi area of Lagos, Nigeria’s Accident Investigation Bureau (AIB), said it was still at the evidence gathering stage in its probe into accident. 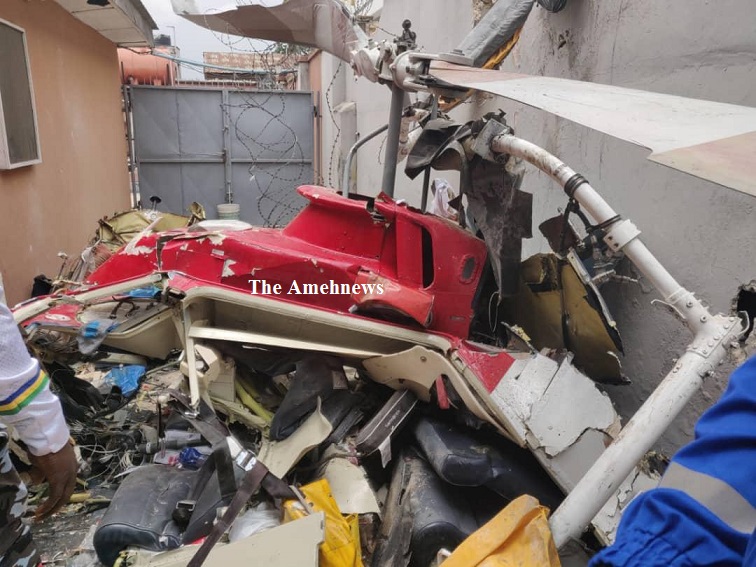 Chief Executive Officer / Commissioner of the AIB, Akin Olateru who disclosed this Tuesday at a briefing in Lagos said the absence of a Flight Data Recorder (FDR) and Cockpit Voice Recorder (CvR), known in aviation parlance as ‘ Black Box ” will not in any way affect the gathering of valuable evidence concerning communication between the control tower and the crew that fly the helicopter.

Olateru, who said the AIB, had already reached out to the manufacturers of the Bell 206 helicopter and engine manufacturer said a team of proficient investigators from the bureau, were already working round the clock to unravel the cause of the crash.

He said besides the black box, the investigators will work on other parameters on the wreckage of the chopper to unravel what led to the crash.

The AIB boss said though the FDR and CVR would have aided the team of investigators in their critical assignment, the crashed chopper does not fall within the regulatory requirement on the basis of weight and number of passengers it could ferry to be fitted with a black box.

He said the AIB in collaboration with others partners will in the next weeks release an interim report on the crash even as he cautioned against insinuations of what may have caused the crash.

He clarified that Bell Helicopter 206 B 111, does not have the built technology to eject fuel describing it as a very light aircraft that does not have capacity to jettison fuel.

Olateru said the AIB has in- country capacity to examine necessary evidence that will lead to the cause of the crash, saying the invitation it extended to the aircraft and engine manufacturers was in line with internationally prescribed standards.

He said the crash has not dented the safety image of civil aviation in Nigeria, as it was the first civil aircraft accident in the last five years.
He spoke of plans to sign a Memorandum of Understanding with the Lagos State Emergency Management Agency (LASEMA) and other agencies that have been assisting in responding to emergency.

He cautioned against tampering with evidence at the crash site urging the statutory bodies mandated by government as first responders to step up their game.
Olateru said: “We have commenced investigation into the crash of the helicopter and can confirm that the wreckage has been recovered and in our custody. The AIB did not retrieve any flight data recorder or cockpit voice recorder from the site of the crash. The Bell Helicopter as a very light five seater aircraft does not meet the requirements to be fitted with such components. Only 10 seater helicopters carry flight data recorders.

“Though a flight data recorder would have aided our investigation, but, it is not the only means of evidence gathering. The AIB nevertheless has competent personnel to retrieve information from other components and sources. The ill- fated chopper does not fall within the category by law, regulation, weight and number of passengers it carries to be fitted with either a flight data recorder or cockpit voice recorder.”

Olateru, however, commended the Lagos State Government for the quick response in fixing the damaged fence and buildings where the chopper crashed in Opebi.

He said: “The AIB has done all that is needed of it at the site. We cannot leave the people to be traumatized for too long. The people have been in darkness, rather than wait for the insurance company to discharge its duties, the Lagos State Government has responded positively in fixing the buildings affected by the crash.”

Shopping smart in the face of looming recession