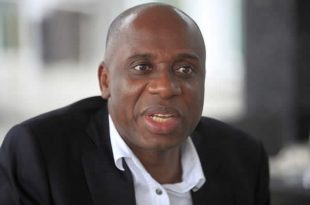 The Federal Government has placed orders for the importation of 30 coaches and 300 wagons to be deployed on the Lagos-Ibadan railway when the project is completed.

According to the Minister of Transportation, Rotimi Amaechi, the coaches and wagons will boost the movement of passengers and goods from Lagos to other locations in the South-West.

“We are expecting 30 passenger coaches and 300 wagons,” Amaechi revealed while speaking at a recent assessment of the ongoing work being done on the rail project by the China Civil Engineering Construction Company.

In his contribution to the discussion, the Managing Director, Nigerian Railway Corporation, Fidet Okhiria, said the NRC was also expecting two sets of Diesel Multiple Units, comprising 10 coaches each.

“We are also expecting two sets of DMU made up of 10 coaches each,” Okhiria said.

The PUNCH reported on Friday that the Federal Government gave marching orders to the contractor handling the Lagos-Ibadan rail line to deliver the Iju (Lagos) to Agbado (Ogun) section of the project within the next two weeks.

The government stated that although there had been a considerable improvement on the project, it was important to get the Iju-Agbado section ready this month as commercial activities were more pronounced on the specified location.

This came as a renowned economist and Chief Executive of Financial Derivatives Company, Bismarck Rewane, stated that the Lagos-Ibadan rail project would reduce inflationary pressures when completed.

Amaechi had directed officials of the CCECC to speed up work on the Iju-Agbado section of the project and get it ready for test-run in two weeks.

Amaechi said, “Getting to Abeokuta you will see that there’s an improvement but the problem they have now is the civil work between Agbado and Iju, which is critical to me because I don’t think passengers will go to Agbado to join the train.

“I believe that the closer we are to Lagos the better for the rail and that is why I had to tell them to tell me what they will do about this before the next two weeks, although there’s a huge improvement up to this point. I want them to speed up the construction from Iju to Agbado.”