Superlative outing by students of Lagos, Ogun and Osun states shot the states to the finals in the on-going Season 5 of the Cowbellpedia Secondary Schools Mathematics Television Quiz Show sponsored by Cowbell Milk, the flagship brand of Promasidor Nigeria Limited. 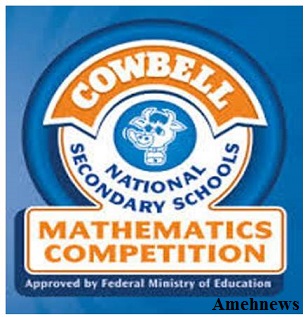 In the Junior category of the first semi-final duel in Lagos last weekend, Abdulganiyu Alli, a student of Ota Total Academy, Ota, Ogun State and Ebube Okafor of Saint Francis Catholic Secondary School, Idimu, Lagos outclassed their mates to sail into the finals of the competition.

Others who could not cross the hurdles include Ayomide Attah, a student of Saint Francis Catholic Secondary School, Egbeda-Idimu, Lagos State and Faithful Unimashi from Saint Annes High School, Calabar, Cross River State.

Alli who scored 115 points to cross the bar, expressed confidence to wear the crown and pray to gain more confidence and momentum in the final battle. Okafor on his part, maintained that he possesses the desire to emerge champion and prayed for God’s grace in the final encounter.

In the Senior category, Oghenero Ologe a student of Zionfield Pinnacle School, Ikorodu, Lagos State garnered 95 points to advance in to the finals. He was joined by Hezekiah Olabisi from Bibo Oluwa Academy, Ilesha, Osun State who scored 90 points.

Other who fell by the way side include Chinoso Emmanuel of Dority International Secondary School, Abakaliki, Ebonyi State and Philip Awodiya from Bibo Oluwa Academy, Ilesha Osun State,

Ologe and Olabisi are both hopeful of a spectacular outing in the final and equally prayed to achieve their dreams of winning the ultimate prize.

Not a few observers affirmed that this year’s edition is actually living up to its billing in terms of excitement and reward as promised by the organisers in line with the goal of “nurturing great inventors”.

The quiz show billed to run for 13 weeks, has been on for the past 10 weeks; and divided into nine preliminary stages and three semi-finals before the grand finale in November 2019.

Aside the N2 million grand prizes, Managing Director of Promasidor Nigeria Limited, Mr. Anders Einarsson disclosed that the winner in each of categories, (Junior and Senior) will enjoy an all-expense paid educational excursion outside the country at the end of the initiative.

The 2019 edition of Cowbellpedia Secondary Schools Mathematic TV Quiz continues this weekend. It will be aired on DSTV Africa Magic Family Channel, AIT Network and other six television stations across the country.