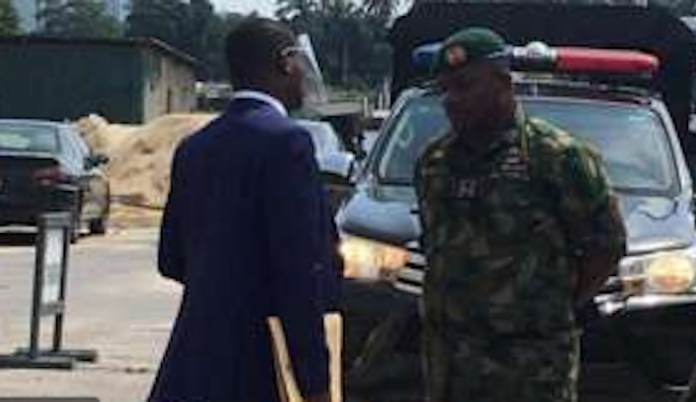 In a bid to unravel claims of mass killings by the military at the Lekki toll gate in Lagos during the EndSARS protest, the retired Justice Doris Okuwobi-led Judicial Panel of Inquiry for Restitution for Victims of SARS and the Lekki shootings, yesterday paid an unscheduled visit to the Military Hospital in Ikoyi, in search of its mortuary.

There had been speculations that the bodies of some protesters were dumped at the mortuary after being allegedly killed by soldiers while trying to dislodge them at the toll gate.

But gaining access to the mortuary was initially tough following a mild standoff between members of the panel and soldiers manning the gate of the military hospital.

The soldiers claimed that they were not aware of their coming and that it was against protocol coming without prior notice.

While inside, they were conducted round the military facility by General A. I. Taiwo. Surprisingly, no mortuary was found at the facility during the inspection.

General Taiwo disclosed to the panel that the hospital did not have a mortuary.

The panel members were also informed that the hospital had been under renovation in the past one year.

He said, “We are exercising our mandate on behalf of the governor of Lagos State under the tribunal laws.
“We have already inspected the Lekki toll gate today (yesterday) and we are here to pay an unscheduled visit to the mortuary of the Military Hospital.

“We have confidential information concerning certain events that took place at the hospital here and we are waiting for them to grant us access to inspect the mortuary because we have reasons to believe that that facility is relevant to our investigation.

“We don’t want to make any conclusions yet until we get access to that mortuary. We have a pathologist with us who is here to help us conduct medical examination of bodies in the mortuary.”

But all the claims by the panel turned out to be a ruse.

Members of the Judicial Panel of Inquiry had earlier visited the Lekki tollgate scene of the shootings where five bullet shells were found.

During the visit, the Managing Director of the Lekki Concession Company (LCC), operators of the tollgate, Mr. Abayomi Omomuwa, who conducted members of the panel round the facility, revealed that the footage of what transpired at the toll plaza on October 20 was intact.

He said a camera on the mast worked until the carnage on Wednesday, October 21, 2020.

“We have the toll plaza one and the Lekki toll bridge which is also known as TP3. We have the last location which is around the Chevron area. We don’t collect toll there. It is our main office and that is the Toll Plaza two. This is where the shooting of that day occurred.