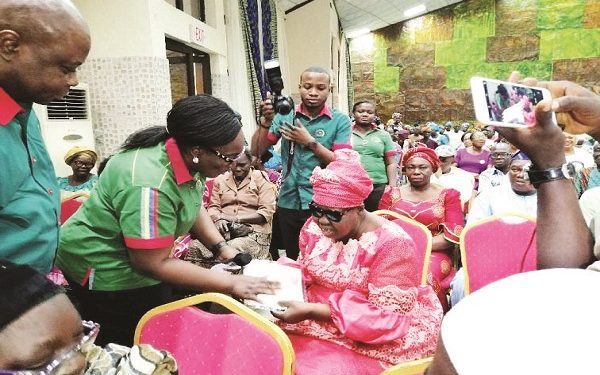 Mrs  Onanuga, who spoke at the 72nd Batch Retirement Benefit Bond Certificate Presentation in Lagos, said the state has paid another N1.88 billion for 466 retirees.

She said the plan to clear all the backlog would be achieved through the solid structures that had been put place by the government.

She added that the mandate would be possible because the state government had increased the funding of the redemption funding account from which the accrued right is paid, from five to 10 per cent.

She noted that the government had also approved a budget of N13 billion and a pension sinking fund in addition to the monthly increase.

She said: “We have a lot of fund flowing in to enable us make these payments and that is why in the last few months ,we have been paying about N2 billion monthly on the retirement bond.

“With this trend, we are very sure that by 2021, we won’t have any outstanding backlog, “ she said. The backlog currently being paid is for retirees before April 2007 when the state transmitted to Pension Fund Administrators (PFAs).

She said any worker who had joined the state service after April 2007 and is retiring immediately transmits to become a pensioner because his or her funds are already being deposited in the Retirement Savings Account (RSA).

“The accrued rights , which is the one we are having a challenge with is what we are taking a bold step to resolve. The accrued was huge because there were years in the past when the government embarked on mass recruitment and the employees in those set will retire at the same time after 35 years.

“The government will, however, need a lot of funds to pay for the benefit of those set unlike the scenario where the recruitment was not very huge. With what we have in place, we have taken into consideration what we need to pay the beneficiaries till 2022 and by 2021, we are sure that even before workers retires their pension right will already be in theit RSAs.’’

She noted that the pensioners were majorly beneficiaries of 2017,  2018 and last year, adding that they were mostly retirees from the State Universal Basic Education Board (SUBEB).

Onanuga said the state would not have had problem with accrued right if it had not recognised to also carry along local government workers and private schools teachers under SUBEB.

The DG, however, advised the retirees to make a suitable choice between the Annuity or Programme Withdrawal option according to their preference as presented to them by their PFAs for the payment of their pensions.

She advised the pensioners to be prudent with their entitlements and be careful with the kind of business they invest their money on.

Mrs Onanuga urged the elder statesmen to write a will and admit it to probate so that it will not be a subject of controversy if death occurs.

“Make sure you write your will, keep it in a law court and in a safe place as it in your best interest if death occurs.

“It makes things very seamless for your next-of-kin because a letter of administration takes a minimum of one year, as there are cases of even five years to process before your family can access your entitlement,” she advised.

Ayira Rowland thanked God  for enabling them to receive their benefits.

He lauded the LASPEC officials during the processing of their entitlements and the government  led by Governor Babajide Sanwo-Olu for ensuring the processes for the payment to become seamless.

Koleodo Adeyemi Saubana, who retired from Education Quality Assurance Office, Education District 1, Agege, also thanked LASPEC for the treatment given to retirees,  urging those that were yet to be paid to wait and avoid cutting corners.