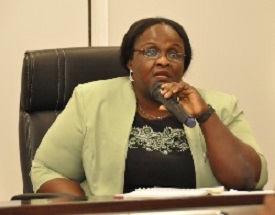 The Lagos State Consumer Protection Agency (LASCOPA) has explained readiness to ensure that all consumers in the State get maximum satisfaction for all commodities purchased, including their online transactions on various e-commerce platforms.

The General Manager LASCOPA, Mrs. Oluwakemi Olugbode stated in Lagos this during an interactive session with some operators of Electronic Commerce Business to facilitate resolution of several complaints received since the Agency’s operations commenced earlier in the year.

Olugbode listed some of e-commerce related complaints that have been received as misleading advertisements, provision of inadequate information, non-provision of information about vendors where necessary, incorrect prices, delay in the process of refund of purchase and late delivery or non-delivery of goods.

During deliberations at the forum, the General Manager advised the operators of e-commerce businesses to organise themselves as professionals under an identifiable umbrella to standardise the business, enhance efficiency and prevent the influx of dubious practitioners.

The Board Secretary of LASCOPA, Mr. Olajide Oduyebo also urged the operators to create awareness about the agency’s role of protecting consumer-interests, stressing that the agency is primarily established to promote understanding between consumers and buyers and also use the instrumentality of the law against any recalcitrant party.

He described LASCOPA and the various e-commerce operators as important partners that need to work together to realise the vision of the agency in preventing hazardous and harmful products from circulation in the State.

“As a government that thrives on the strength of our commercial activities, we are more interested in the way and manner which your businesses are carried out so that you can continue to maximize profits and also continue to fulfil your civic obligations to the State government,” Oduyebo stated.

Responding, a member of the visiting team, Mr. Seyi Oni, Head of Corporate Governance of Jumia – an online shopping mall – disclosed that the company was using its platform to entrench the culture of online shopping among Nigerians even if it means subsidising the cost of some of its products to the consumers.

He said the company has clearly stated guidelines and penalties for defaulting vendors who do not operate by the online business rules and urged online shoppers to relay their online shopping experiences as feedback on the platform in order to guide other prospective shoppers.