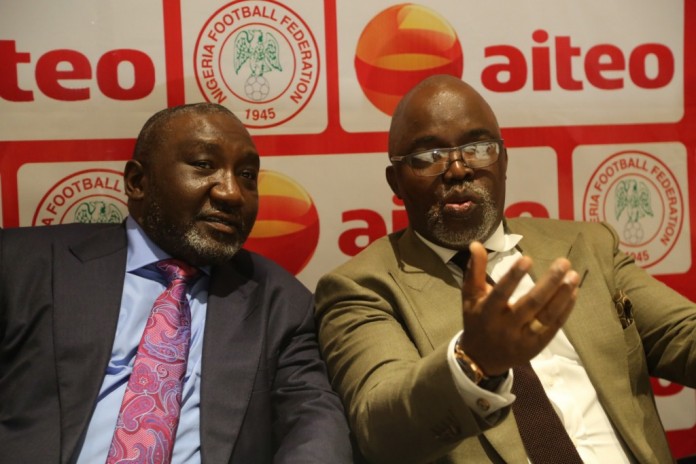 The AITEO GROUP has become aware of media statements relating to suggested investigations of financial dealings at the NFF with respect to funds generated by financial sponsorship.  As the leading sponsor of national football activities in the country presently and the largest contributor of the funds that ostensibly comprise the subject of the investigations, we are constrained to make our position known on the matter.

As has been extensively publicised, we have entered into a number of funding arrangements with the NFF to support its work with the national teams and the Aiteo Cup (previously the Federation Cup).  A number of other commitments that we have made have been supported by the legal agreements that underpin these relationships.

In a statement signed by Ndiana Matthew, Senior Manager, Corporate Communications of the group said these arrangements are backed by robustly drawn agreements negotiated between ourselves and the NFF utilising world class professionals from the legal and commercial world.  At our insistence and in order to address what we considered to be operational obstacles that obscured historical issues of transparency and proper accounting, the agreements included, third party financial as well as management entities aimed at eliminating those obstacles.  These agreements were executed to national and international audiences at various times in the course of 2017 and have been operated with utmost attention to the highest levels of financial probity and professionalism.

We believe that it has become necessary, given the critical importance of providing well-meaning Nigerians with our views on the accurate position, to offer the following observations so that misunderstandings are avoided:

1 Aiteo has, since coming into Nigeria Football to take up the provision of financial support to the technical crew for the National Team in April 2017 demonstrated its satisfaction with the relationship by expanding the relationship to cover the sponsorship of the AITEO CUP. Continuing satisfaction then led to our sponsorship of the NFF Awards (with the first edition held in Lagos February 2018). Additionally, AITEO has supported the NFF with building of State FA secretariats to support grass roots football development (with 6 across the six zones of the country on the verge of completion and another 12 about to start). AITEO has also heavily supported the qualification of the Super Eagles for the 2018 World Cup offering huge incentives and bonuses to motivate the players during critical matches. During the recently concluded 2018 World Cup proper, AITEO hugely motivated the players with a bonus of $50,000 per un-replied goal.

2 AITEO further confirms that it insisted and approved the involvement and participation of FINANCIAL DERIVATIVES COMPANY LIMITED (FDC) as Official Funds Managers in the manner and upon the terms set out in the various contracts.  FDC manages all the sponsorship funds to ensure proper auditing and utilisation as envisaged in the contract. We confirm that we are satisfied with the role and performance of FDC.

3 AITEO confirms that MEDITERRANEAN SPORTS LTD is the official Marketing Agency that facilitated and packaged its entry into Nigerian Football. Mediterranean manages the relationships between NFF and AITEO in the manner and upon the terms set out in the various contracts. We confirm that we are satisfied with the role and performance of MSL.

4 Nigeria has just returned from a World Cup campaign from which the country can feel justifiably proud of its accomplishment at the tournament.  The position of the practices and regulation of World Football in FIFA’s statutes, regulations and practices are common knowledge.  Whatever the case is, Nigerian football cannot operate in isolation.  This compels the absolute necessity to operate within the parameters that regulate the other 210 countries that comprise World Football. The prevalence of the current crisis detracts from the exalted heights of respectability Nigeria now enjoys in African and World football.  Crises like these are unnecessary distractions and are unhealthy and divisive.  If this persists, there will be only one loser – NIGERIA and its 180 Million people! This consequence must be avoided, at all costs.

5 AITEO lends its voice to that of many well-meaning Nigerians to call for the quick and decisive resolution of the current issues especially as future campaigns for glory in the African Nations Cup are imminent. Indisputably, certainty and stability with the leadership of the NFF remain pertinent to sponsors like us to continue to commit to the growth of Nigerian football in the manner that we have done.  The persisting situation makes it difficult for us, as a law-abiding entity, to operate responsibly within the demands placed on us. Accordingly, we are constrained to indicate that unless these issues are resolved satisfactorily in the manner dictated by the requirements of the world governing body FIFA within fourteen (14) days hereof, we will deem ourselves compelled to reconsider our position with respect to participation in the various arrangements in which we are involved.

We trust that the observations we have made in this release will provide both assurance and clarification on some of the issues that may have been raised by these circumstances.