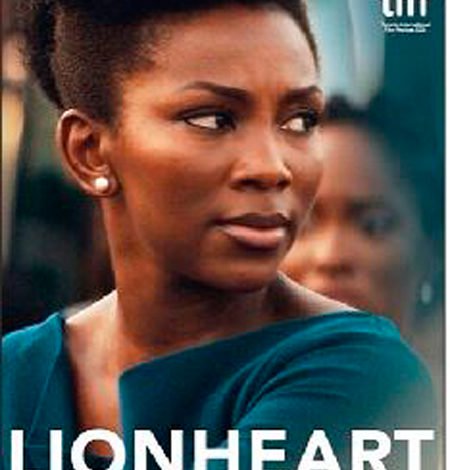 While several privileged filmmakers from Nigeria would claim a parallel brand from the derogatory Nollywood tag, sultry actress, Genevieve Nnaji has stuck to her guns, using her directorial debut, LIONHEART, to shift the narrative. She asks, albeit subtly – what’s in a name?

From the same old bottle, she serves a slightly different wine, and unashamedly says – it can only get better. Now, that’s how to earn some trust for a brand hugely underrated; the audacity of faithfulness.

It is a different feeling that the film got a landmark deal with Netflix; a retroactive contract of original acquisition. It also matters less that Genevieve’s evasiveness, her famous disproportionate privacy, and branded solitude is a social minus in the estimation of those who deserve her attention, myself inclusive, LIONHEART exudes an emotional appeal that may stand in the way of those obvious, but arguable shortcomings.

Each time a Nigerian film is showcased at international film festivals with the kind of pre screening fanfare that LIONHEART received, I sit on the edge, anxiously waiting to smack exaggerated PR to size. If those were drawn from personal resentment, perhaps Genevieve’s personae might be visited on her work, but LIONHEART speaks for itself.

The film, which stars Nnaji, Nkem Owoh, Pete Edochie, Onyeka Onwenu, Chika Okpala, Kanayo O. Kanayo and Genevieve herself, is the story of a young woman who has to prove her worth as she steps up to run her family’s company when her father is sidelined by health issues. Simply story line, but one which appeals to the current global agitations for women’s inclusion, liberation, and equal rights for women in the scheme of things. Let’s just say that Genevieve identified one of the interests of TIFF, and had catered to that need, to secure official ecognition. But more importantly, her treatment of the story, choice of cast and crew has made the difference.

One gets the same feeling of what, in some quarters, is referred to as Asaba movies, in view of the ‘old’ cast, stereotypes, language and plot, but LIONHEART is not some lousy joke.  It is a typical Nollywood story with class. Yes, it hires the expertise of Yinka Edward as Director of Photography and had an unusual retinue of writers, the film sticks to the Nollywood mien without trying to be arty or ‘New Nollywood’. LIONHEART is not loud, it is not excessively wordy. For what could be considered a Nigerian comedy, the writers (Chinny Onwugbenu, Nnaji, Ishaya Bako, Emil Garuba and C.J. Obasi), rather than the actors tell the jokes. Thus, you may giggle at the mere sight of Usuofia (Nkem Owoh), and laugh to his lines, you may appreciate the script better when Pete Edochie, Sani Muazu, Genevieve and other non comic actors in the movie get you cracked.

If what many regard as Nollywood is anything to go by, the film is a smart departure from that tradition, thriving on pace, picture, sound and cinematography. While LIONHEART is not a perfect movie, and may not have the wow factor that the world is looking for from the Nigerian film industry, it is an attempt by an unassuming actress and first-time director, and it caters to what some people want in a simple drama without some exaggerated acting, lousy and over exploited jokes that annoys. The field can only allow for other genres to play, and play it well. If the feat achieved by this movie has made anyone proud, that person is the late Amaka Igwe who believed and preached the Nollywood phenomenon. Who knows, she may have moved in her grave, with a smile, saying: ‘this is just the beginning. Well done, Genny.”

Falz, Simi, others to thrill at Nickfest