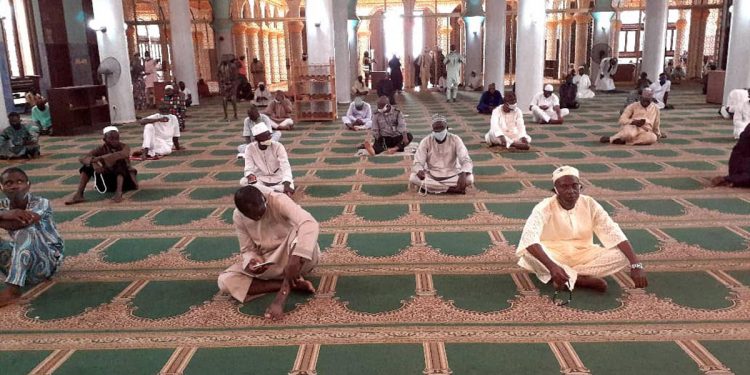 SOME sections of the Muslim community in Lagos heaved a sigh of relief, yesterday, as they worshipped at various mosques for Jumat service.

The last time they were opportune to observe the special weekly prayer was in March before the Lagos State government suspended all religious activities due to the outbreak of the Coronavirus.

Lagos State Commissioner for Home Affairs, Anofiu Elegushi, in March, announced the suspension after a meeting with religious leaders.

Elegushi said, “We met with religious leaders, both Christians and Muslims. We discussed, argued and realised that the lives of Lagosians are important to us. We prefer to offend people than to kill our people.”

The suspension was for an initial four weeks but it could not be lifted due to the increase in the number of infected persons.

Lagosians had to wait for four months before their hope of resuming worship at the mosque was met.

While mosques were reopened on Friday, August 7, churches in the state will resume services from Sunday, August 9.

Governor Sanwo-Olu, in a broadcast at the Lagos House, Marina, however, said the religious houses would open only once a week for their regular services at 50 per cent of their capacity though they can hold multiple services on such designated days. Other weekly services and vigils remain suspended.

The governor’s announcement elicited mixed reactions among Muslims. While some believed it was overdue, many argued that time isn’t ripe for reopening of the worship centres.

Thus while some mosques opened for Jumat service yesterday, others remained shut.

At the Lagos Central Mosque, Idumota, a handful of worshippers came to pray. They were not up to one-quarter of the mosque’s capacity.

Officials of the mosque checked the temperature of the worshippers before they entered the mosque after they washed their hands, used sanitisers and while donning their face masks.

Inside the mosque, the social distancing protocol was observed and monitored by the the Chief Imam of Lagos State, Sheikh Sulaimon Oluwatoyin Abou-Nolla, in compliance with the directives of the state government.

Sheikh Abou-Nolla said those above 65 were advised to pray at home.

At the Alubarika Central Mosque, Ilasamaja, Mushin, the requirements for entering the mosque were pasted at its various entrances by the mosque’s authorities.

Worshippers who attempted to pray without face masks were turned back at the entrance as the Chief Imam of the mosque, Muhammad Adetayo, reminded the worshippers to maintain social distance from each other. Those who prayed at the mosque were not up to one-third of its capacity.

The mosque’s Manager, Mutiu Ogundepo, said the mosque was fumigated twice to decontaminate it before the Friday prayer while an infrared thermometer was provided to check people’s temperature.

“We also ensure that soap, water and sanitizer were provided for worshippers. Everything went well with the protocol observed,” he said.

He said: “It was a happy day for me. It had been so long that we performed Jumat in congregation. The protocol of the state government was duly observed. We were given hand sanitizer; after using it, we got liquid soap to wash our hands before performing ablution. We were given tag number for the space available to prevent population and you can’t enter without a face mask. Immediately after the sermon and two-rakah salat, everybody observed silent prayer and went out. There were no hugging and handshaking. The arrangement was superb.”

There was a long queue at Lagos Secretariat Central Mosque, Alausa where the Commissioner for Home Affairs Prince Anofiu Elegushi and Chairman of the Mosque, Dr Tajudeen Afolabi welcomed the congregation.

The rule of allowing worshippers into the mosque complex was hung at the only gate opened for entry. Those who do not meet the rules were politely turned back.

However, Jumat service was not held at the University of Lagos because it was deemed unsafe to reopen the mosque, according to the Chief Imam of UNILAG Muslim Community (UMC), Dr. Ismail Musa.

Musa argued that in line with the dictate of the Shari’ah and expert advice, the UMC mosque will not be available for Jumat prayers until it is deemed safe to reopen the mosque.

News of government’s reopening of churches in Lagos, on Sunday, August 1, equally elicited mixed reactions among the Christian community.

Notwithstanding government directives on safety protocols on worship centres, many of the worshippers believe the government is doing what it should have done long before the lockdown, which is asking every worshipper and church leadership to take responsibility.

In his words, the General Overseer of the Mountain of Fire and Miracle Ministry, (MFM) Pastor Daniel Olukoya said, “The leadership of the church is aware that the governments of Lagos and Ogun States had announced that churches could resume worship in their physical church buildings as from August 9 and 16, 2020 but MFM will not reopen all her regions, zones, branches and facilities in Lagos and Ogun states for now.”

Olukoya, who spoke through the Chairman, MFM Media Committee, Oladele Bank-Olemoh, noted, that MFM stated that the church will utilize this period to put in place COVID -19 preventive and safety protocols as stipulated by the NCDC, federal and state governments.

He disclosed that MFM would continue to hold her services exclusively on the church television and other social media platforms, adding that the tentative date for reopening for physical gatherings is September 13, 2020.

Similarly, The Elevation Church in a newsletter, said it will not open its doors for worship.

“We are glad to hear this but we will not open on Sunday, August 9, because we will need to ensure that we are well prepared to hold services while assuring your safety,” said the church in its newsletter.

The presiding pastor of Shepherdhill Baptist Church, Obanikoro, Reverend Israel Kristilere, said, that his church will open on Sunday as he has observed all the guidelines set up by the government.

“We are resuming and our church is prepared to meet with all available precautions so that we can have a meaningful COVI-19 free experience. We have a very large capacity of 3,000 to 4, 000 members and because of the rule, we are only preparing to host 500 worshippers,” he said.

Also, the management of the Daystar Christian Centre has said that the church will not resume its services despite government go-ahead order for churches to resume operation.

In a statement signed by its founder, Sam Adeyemi, the church said it was aware of the state government’s announcement that churches can reopen for services from August 9.

It, however, said that, “The leadership of Daystar Christian Centre has resolved not to open her worship centres for physical gathering on the immediate.”

According to the statement, “Daystar Christian Centre will continue to hold her services online, exclusively, pending further review. We look forward to the resumption of physical services in a safe environment. We urge our members and friends to join us on all our online platforms for life-transforming services.”

The Archbishop of the Calvary Kingdom Church (CKC), Archbishop Joseph Ojo, Lagos, stated that, easing the lockdown is a good omen for the country and the economy, and the spiritual health of the nation.

He said, “Responsible ministers have all put in place the modus operandi of ensuring that their various congregations are safe and protected.”