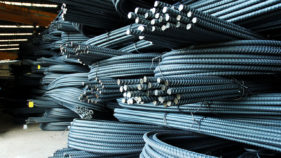 The group, at a press briefing in Abuja which was addressed by its consultant, Mr Obiorah Ifoh, also called for the reintroduction of pre-shipment inspection in order to check the high incidence of the importation of the substandard steel products into the country.

Ifoh said, “GISMA has been battling for sometime with this dismal economic sabotage which may lead to the collapse of up to 60 per cent of manufacturing in the production of galvanised iron and steel companies in Nigeria.

“If unchecked, it may also result in a mass lay-off of more than 50,000 direct employees and crystallisation of numerous associated systemic risks in the Nigerian steel industry in a country where unemployment is already on the high side.

“There is a cartel of economic saboteurs who import huge volume of containers every week valued at about $5m which are never captured on the Nigeria Customs Service portal, making the Federal Government of Nigeria to lose an estimated revenue of about N1bn on a weekly basis and N52bn annually on these smuggled items due to the neglect of pre-inspection of any container coming into the country which was hitherto the practice in Nigeria.”

He added, “Abandonment of pre-inspection of goods at the point of entry has created leeway for smugglers to flood the Nigerian markets with substandard products, including steel products.

“It has also made the nation’s borders and seaports porous, leading to the influx of illegal arms and explosives into the country. Such a development is inimical to national economic development and national security.

“It appears that government security and revenue generating agencies have been either overwhelmed or are ignorant of the nefarious activities of the smugglers.”

The group claimed that seven of its members had shut down operations as a result of the activities of illegal importers.

Chairman, Presidential Committee on Trade Malpractices, Mallam Dahiru Ado-Kurawa, said the claim of the group had been on.

He said, “The issue was brought to our attention by GISMA interested party within the Manufacturers Association of Nigeria. It has been an issue for sometime, probably more rampant now as smuggling in so many products is usually predicated upon, maybe international pricing, domestic fiscal policies, among others.

“What we have come across recently is that there is misclassification of galvanised roofing sheet in terms of duty code. That is a very technical way of smuggling and quite difficult to prove unless some serious efforts are employed by the already over-stretched Nigeria Customs Service.”