The Manufacturers Association of Nigeria (MAN) in its recent report as it contained in the Manufacturers Confidence Index (MCCI) disclosed that 92% of CEO Member-companies said the multiple/over-regulation by Agencies of Government depresses productivity in the manufacturing sector. 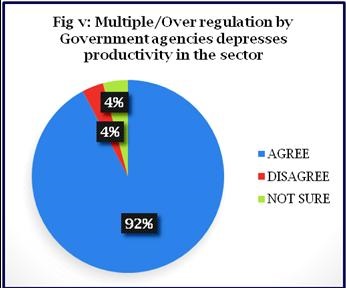 According to the MCCI’s survey which covered 400 Chief Executive Officers of MAN member-companies which was created to gauge the changes in manufacturing activities quarterly as a result of changes in the macroeconomic ambience and Government policies.

The over 400 CEOs of manufacturing companies are in an agreement on the impact of changes in the economy on manufacturing operations if Government at all levels make efforts to harmonize regulatory operations, checklists and mandates in a manner that these agencies can promote friendlier operating environment and enhance sustainable economic growth in the country.

The report further pointed out that multiple taxes and levies depress production in the manufacturing sector evidenced by the numerous taxes, levies, fees and other charges that manufacturers pay to Agencies of the Federal, State and Local Governments on account of arbitrary increase in their revenue target.

It is expedient that government need to streamline the observed multiplicity of taxes to ensure that only approved taxes/levies/fees are charged by agencies of Government on the single product.

How availability of Forex Impacts on Manufacturing Sector-MAN

Kindly Share This Story:….. most manufacturers not being able to adequately source FX for importation…

MTN Customers Are Back On USSD Channels of Banks