Barrister, Iju Tony Nwabunike , a maritime business expert/ practitioner and National President of the Association of Nigeria Licensed Customs Agents (ANLCA), stated that the process of making Nigerian Shippers Council a stronger economic regulator by an Act of the National Assembly should be activated and expedited. 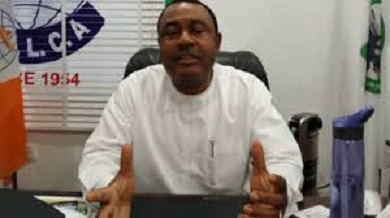 ANLCA President Nwabunike in his writes up ‘Imperative of Adequate Maritime Security and Zero Tolerance to Corruption in the Face NPPM Implementation’ said since the manual itself and the ports economic regulator (Nigerian Shippers Council) that is to implement it are not backed by any law, except by executive fiat, it is important that its provisions are not in conflict with any extant law governing our maritime activities.

He noted that on the invitation of the Minister of Transportation, I participated with other notable maritime stakeholders, in a meeting on the implementation of newly launched Nigeria Port Process Manual (NPPM).

Barrister Nwabunike commends the Federal Government for putting the implementation meeting together and it’s other efforts towards realisation of the NPPM dream through agencies like Nigerian Shippers Council and Nigerian Ports Authority, I urged that it be seen as a step towards the right direction but not as final destination.

He noted that the NPPM was conceptualised to promote transparency, accountability, predictability and eradicate corruption in the port system, this is not the first time we are having laudable concepts on paper on how best to harvest benefits from our ports.

He stressed that “My about three decades of operation and full time presence in our maritime environment confirms that we have ideas, know the good things to do to become great but allow narrow minded interests and in some cases, corruption to reign over our good intentions.

ANLCA President pointed out that commercial shipping and the entire maritime industry has become a fulcrum on which the nation’s prospect for economic sustainability rests.

“While many describe our maritime industry as second to oil, I see it as embedded in the oil and gas industry because oil activities only thrive in a safe and enduring maritime sector.

“Even the much talked about agricultural business expansion can only earn foreign exchange through export when shipping of farm produce and commodities happen from maritime activities.

Nwabunike said you cannot transport crude oil or ship in refined products without the use of vessels traveling on water and using ports, jetties or anchorage areas for berthing or resting on transit. It is therefore apt to conclude that amount of security provided for this critical sector is too much, he added.

In his Words: The causes of maritime insecurity in the Gulf of Guinea are multiple and multilayered, and they are manifest in violence, corruption, and in communi- ties that resort to any means available to improve their circumstances—even if through illegal trade, insurgency, or piracy.

He noted that it is worrisome that the GoG where Nigeria holds a great stakes accounts for 95 percent of maritime kidnappings in the world.

“Nigeria is the largest trading entity with the biggest stake controlling over fifty percent of the total maritime trade volume in this area and by default has become the quick to mention country whenever GoG insecurity issues are raised.

On 17 July 2020, he noted that eight pirates armed with machine guns boarded a product tanker underway around 196 nautical miles southwest of Bayelsa, Nigeria. They held all 19 sailors onboard hostage, stole ship’s documents and valuable items, and escaped with 13 kidnapped crew members, he affirmed.

This is just one example of a regular trend on our waters, he said.

“So seafarers are endangered in their efforts to bring cargoes to Nigeria or take exports from our country.

Nwabunike as a man of practical said “While we were seated in Abuja, discussing the NPPM, some fishing companies were in mourning mood in Lagos as two seafarers were reportedly killed, as daredevil pirates attacked and boarded a fishing trawler within the Escravos in Delta State.

In tackling insecurity, government should deliberately engage youths of coastal communities close to the Gulf of Guinea in fighting maritime crimes in a manner similar to the Civilian Joint Task Force (JTF) it is presently deploying in fighting insurgency and terrorism in the North East part of the country, he said.

“The fishing boat simply identified as MV. Ft Rose lll and owned by Atlantic Shrimpers Limited was said to have been attacked on 30th of January 2021.

He stressed that the two sailors unfortunately lost their lives in the attack at about 6a.m local time, while other crew members aboard the vessel sustained various degree of injuries.

ANLCA Boss hit the nail on it head saying our port processes have been largely manual, analogue, archaic and not in sync with modern realities. From access control to cargo examination and submission of manifests by ship masters, we have remained complacent with a system on slow mode by default, he added.

It is only recently that the Nigerian Ports Authority (NPA) stepped up efforts for electronic call up system of trucks into the ports and Nigeria Customs Service commenced move for procurement of modern scanners, he said.

According mr Nwabunike, accessing the ports and physical examination instead of using scanners have been lucrative areas of corruption and inefficiencies in our port system. One finds it difficult to understand why we allowed such unproductive methods to thrive for many years, he noted.

He pointed out that we can only imagine our losses as a country from this high degree of complacence considering that concealments could escape detection by physical modes during examination and time spent to physically examine 5 containers could be used to examine 100 containers when you apply the right machines and human capital expertise.

ANLCA President pointed out there was the controversy of NPA and Nigeria Customs Service flexing powers on whose side the single window system should be domiciled.

There is also the reality of many government agencies laying ambush to seize released containers from the ports after it was assumed to have participated in joint examination before such containers exited, he stressed.

“Bottom line outcomes of these disjointed approach to port processes was that money found their way into private pockets and prohibited goods may have entered the country while government lost revenue leaving the country with additional economic, social and security challenges.

“I view the plans by Lagos State Government to restrict movement of trucks to certain periods of the day as counterproductive to the dream of achieving 24 hour port operation and a more robust economy.

Emphasis should rather be on upgrading the support infrastructure like roads, power supply, bridges and ancillary services to support existing logistics like the laudable Bola Tinubu Truck Park, added he.

Barrister Nwabunike cited the statement by representative of the Independent Corrupt Practices and related offences Commission (ICPC) and I agree that almost all the government agencies operating in the port are complicit in corrupt acts one way or the other. This is a shameful and backward trend.

He made it cleared that if the Nigerian Port Process Manual (NPPM) must be seen as a document of high value beyond the paper on which it was printed, it’s initiators and drivers must continually practice an all inclusive implementation mode devoid of personal ego or one government organisation trying to assert superiority over the other.

He pointed out that “Interventionist organisations such as Niger Delta Development Commission (NDDC), Presidential Amnesty Office and other similar bodies could be contracted as first line of communication with the youths to make piracy, sea robberies, kidnapping of crew members and attack on ships less attractive and difficult to carry out as indigent youths will be enlisted into the fight against these maritime crimes.

“While lauding the recently announced intervention by the European Union to help secure the GoG, Nigeria should take the lead among Gulf of Guinea Commission countries in getting them to replicate our Suppression of Piracy and Other Maritime Offences (SPOMO) Act and enlist non government actors in the quest for orderliness in the area.

“At the level of Association of Nigeria Licensed Customs Agents (ANLCA) where I lead as National President, we have a resolve to support government in achieving its laudable objectives for setting up the NPPM.

“We should critically pursue solutions to the problems of security on our waters, strengthen our use of technology for faster and more secured system as well as resolving to pursue national interest beyond personal gains

He noted that when people don’t get punished for corruption, tendencies are that they will come back to commit the same ‘profitable’ crime over and over again. Meeting illegality with stiff sanction is the way to go.

LOVE IT with GOtv this Valentine’s Week

Foreign exchange inflow drops to $5.7bn in one month