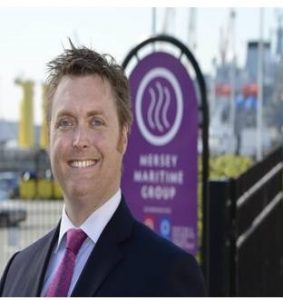 The judging panel in this year’s Mersey Maritime Industry Awards (MMIAs) has got its work cut out as it looks to select three worthy finalists for its Rising Star award.

Sector representative body Mersey Maritime set up the MMIAs as a brand new event in 2014, seeing a real appetite from its members to celebrate the excellence, dynamism and diversity that exists across the Maritime Sector in the UK’s North West. The Rising Star category wasn’t introduced until the second year. It came about in response to feedback from employers keen to reward the younger members of their workforce whose fresh approach and achievements they see as the key to future success.

Mersey Maritime CEO Chris Shirling-Rooke said: “The Maritime Sector in the North West has seen massive investment in recent years and serves to remind young people how exciting a career in the Maritime Sector can be. That success is visible and was palpable in events towards the end of 2016 such as the opening of Peel’s £400m deep-water container terminal at the Port of Liverpool, worldwide coverage of Cammell Laird’s keel-laying ceremony for the £200m polar research ship the Sir David Attenborough and the christening by HRH The Princess Royal of Atlantic Container Line’s new CONRO vessel Atlantic Sea.

“Entries for Rising Star this year reflect the stellar quality of the younger generation now starting to come through. These young people are making an active choice to work in the Maritime Sector; they are taking the industry forward, injecting new ideas and helping bring about change that will help our industry to stay competitive.”

As part of the judging process all candidates attend a personal interview, hosted this year at the Liverpool office of maritime law firm Hill Dickinson. MMIA judge Gary Hodgson, Chief Operating Officer, Peel Ports Group, said he had been impressed from day one by the candidates he had met.

He said: “I have been a member of the judging panel for all three years of the MMIAs to date and the Rising Star interviews are without doubt the most rewarding part. My role as a judge in this category reflects Peel Ports’ own commitment as an employer to attracting and training young people into rewarding careers in the sector. ”

Fellow judge Prof Ian Jenkinson, Head of Maritime and Mechanical Engineering at Liverpool John Moores University said the maritime industry, like other industry sectors, faces a skills gap which is limiting productivity and competitiveness. He said: “Liverpool John Moores University is working with Mersey Maritime and other partners to develop new qualification and skills pathways that meet the needs of industry in the next 10, 20, 30 years. This year’s Rising Star candidates represent the future. They represent the foundation of a dynamic, highly skilled workforce of the future.”

Candidates for the MMIA Rising Star award in 2017 represent a wide range of companies including James Fisher Marine Services, Royal HaskoningDHV, James Troop & Co and The Engineering College. A complete list of finalists across all 11 award categories is due to be announced on 31 January, with winners announced at a black tie gala dinner held at Liverpool Football Club on 9 March 2017.

The Mersey Maritime Industry Awards are held annually in March to celebrate the breadth and diversity of the Maritime Sector (including key sub-sectors such as Logistics and Energy) in the UK’s North West. They bring industry leaders and senior influencers together from across the region and wider UK, recognising achievement across a range of categories including Business of the Year, Best Newcomer, SME of the Year, Innovation, Engineering, Rising Star, Global Reach, Engineering and Maritime Professional Services. Two new categories have been introduced for 2017: Micro Business of the Year and Positive Impact.

Mersey Maritime is the private-public sector partnership that represents the interests of one of the largest UK clusters of marine and maritime businesses outside London within the following main subsectors: Shipping, Ports and Logistics; Maritime Services; Advanced Engineering; Offshore Energy; Professional Services. Mersey Maritime operates as a not-for-profit entity and funds its work on behalf of the cluster with income raised through membership, industry events and consultancy services. This is currently supported by funding from the European Regional Development Fund for the delivery of business support services under the New Markets 2 programme. The organisation has also entered into a partnership agreement with Liverpool John Moores University in 2015 to develop a global Maritime Knowledge Hub on Merseyside. Phase 1 of the Maritime Knowledge Hub opened in Birkenhead, Wirral, in March 2016.

Apostle Johnson Suleman on his way to DSS Hdqs [PHOTOS]