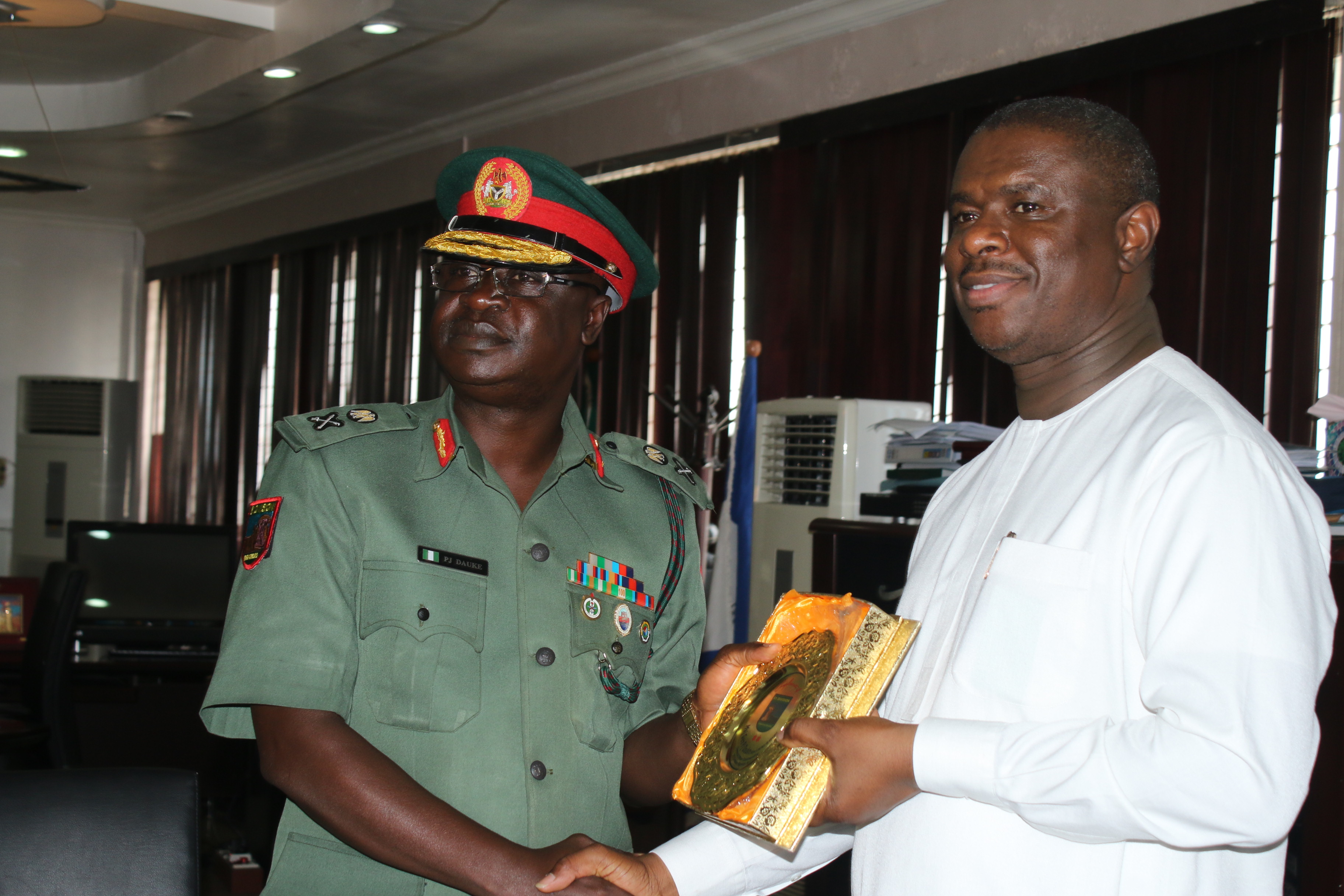 The Director General of the Nigerian Maritime Administration and Safety Agency (NIMASA), Dr. Dakuku Peterside receiving a plaque from the General Officer Commanding (GOC) 81 Division of the Nigerian Army, Major General Peter John Dauke when the GOC paid a courtesy visit to the NIMASA DG at the Agency’s headquarters in Lagos.

The Director General of the Nigerian Maritime Administration and Safety Agency (NIMASA) Dr. Dakuku Peterside has stressed the strategic importance of security agencies to the achievement of safe and secure shipping and a viable and vibrant maritime sector for the country’s benefits.

The Director General who stated this while playing host to the General Officer Commanding (GOC) 81 Division of the Nigerian Army, Major General Peter John Dauke at the Agency’s Headquarters in Lagos said that as the Agency strives to achieve a secure maritime environment, the role of the Nigerian Army in particular cannot be neglected adding that most crimes perpetrated at sea are planned on land.

According to Dr. Dakuku, “we cannot be talking about merchant shipping without security both onshore and offshore, therefore we have to work with not only the Nigerian Navy but all security Agencies in order to ensure that criminals have no hiding place both on land and at sea because a large percentage of crime committed at sea are planned on land”, he said.

He also commended the Army for the successes achieved in the fight against Boko Haram in the north east stating that the sect’s defeat that looked like an insurmountable task about two years ago had been largely accomplished. He charged the men of the Nigerian Army to continue to bring their expertise and professionalism to bear especially when needed in sectors such as maritime.

The NIMASA DG further said that the International Maritime Organisation (IMO) realises the importance of security at the ports and adjoining areas and as such charged member state to ensure the implementation of the International Ships and Port Facility Security (ISPS) Code which NIMASA has been commended for actively executing on several occasions.

In his words, “in recognising the fact that security of our ports and the adjoining areas are very important to the safety of goods and services moving in and out of our country, and our commitment to the full implementation of the International Ships and Ports Security Facility (ISPS)) Code, we have continuously sought collaborative understanding with all security agencies including the Army with which we have an MoU which is in the process of renewal to effectively nip any security challenge in our maritime domain in the bud before it festers” Dr. Dakuku said.

He also said that the Federal Executive Council (FEC) recently approved a new maritime security architectural framework which will also aid in smoothening the working relationships that exist between NIMASA and other government agencies stressing that the need to particularly partner with the 81 Division of the Nigerian Army covering Lagos and Ogun cannot be overemphasized, owing to the strategic importance of Lagos to the nation’s economy being the only state in the country that has two international port complexes 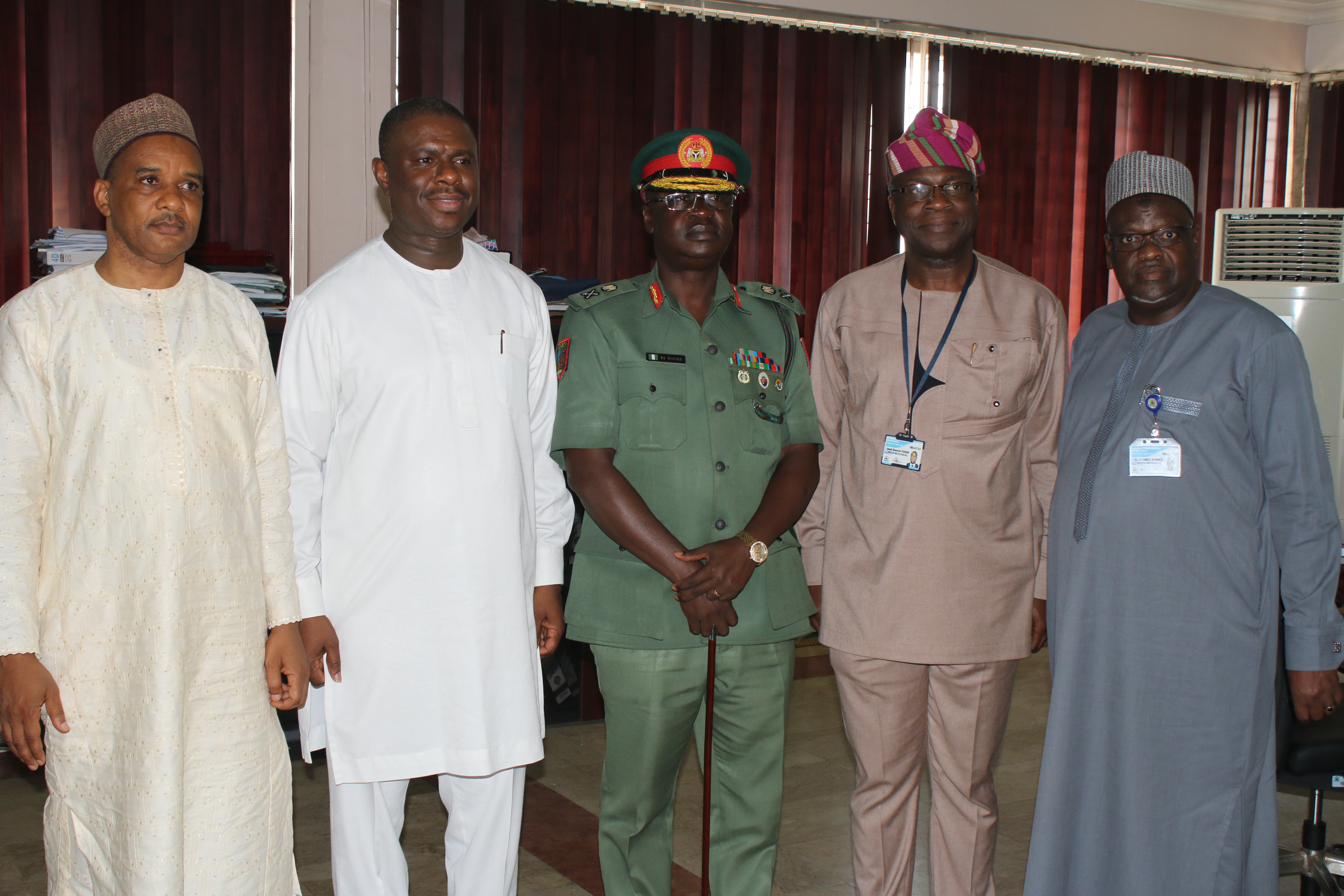 In his response, the GOC commended Dr. Peterside for his strides since assumption of office. He said the Division is fully open to partnership with NIMASA adding that the Chief of Army Staff (COAS) Lt. Gen. Tukur Buratai had directed that all commanding officers to ensure an improved civil military relationship.

Major Dauke further said that the vision of the COAS is for the country to have a professionally responsive Army and that the Army would continue to collaborate to ensure security not only in the maritime domain but the entire country.

Kindly Share This Story: The eight Nigerians, among them five members of the Maritime Workers…

INTEGRITY IS THE BEDROCK OF SUCCESS IN POLITICS- NIMASA BOSS.

Nigeria accounts for less than 3% of tourists visiting Africa – Official