·        Navy: With SMVs We Can Reach Pirates Anywhere On Our Waters

The Integrated Security and Waterways Protection Infrastructure, commonly called the Deep Blue Project, received rave reviews on Tuesday from members of the House of Representatives Committee on Maritime Safety, Education and Administration during an oversight visit to the Nigerian Maritime Administration and Safety Agency (NIMASA) and tour of some of its facilities under the project in Lagos. 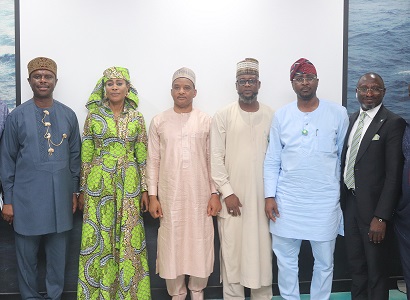 L-R: Dr. Dakuku Peterside, Hon. Lynda Ikpeazu, and some Members of the Committee on Maritime Safety, Education and Administration during the visit of the committee to the Agency’s Headquarters in Lagos, today

The committee members, led by the Chairman, Honourable Lynda Ikpeazu, inspected the Special Mission Vessels (SMVs) under the Deep Blue Project – DB Abuja and DB Lagos – and the C4i Centre, and pledged their strong support for the project.

Corroborating the legislature’s position, the Commander of DB Lagos, Captain Maksun Mohammed, said the vessels will be a game changer in the fight against piracy and other maritime crimes on the country’s waters, as the criminals could be easily reached and stopped.

On his part, the Director General of NIMASA, Dr. Dakuku Peterside, lauded the National Assembly for its continued support for the Agency and the maritime sector, generally. Dakuku also extolled the Nigerian Navy for its leading role in the pursuit of maritime security.

The maritime security assets are funded by NIMASA and run in conjunction with the Navy and other members of the Armed Forces, paramilitary organisations, and agencies under the Federal Ministry of Transportation.

Speaking at the event, Ikpeazu said the committee was impressed by the projects the Agency had facilitated in recent times, adding that the Floating Dock acquired by NIMASA remained a viable project that would generate lots of revenue for the country.

“We need to get a permanent berth for this huge platform because when it is fully operational it would amount to a very huge revenue earner for Nigeria because a lot of vessels would be able to dry-dock in-country,” she said.

On the SMVs and the Command, Control, Computer Communication, and Intelligence Centre (C4i Centre), which the committee visited, Ikpeazu said she was impressed with the level of coordination at the centre, especially the partnership between NIMASA and the Nigerian Navy. But she advised that aside NIMASA working with the Navy, the Agency should collaborate with other relevant Agencies, saying this would help in the battle against illegalities in the maritime environment.

Speaking on the SMVs, which are fitted with fast interceptor boats, Mohammed stated, “We have had hijack cases on our waters and more often than not, the reason they are successful is because they are beyond reach. But with this craft, that is not going to be an issue anymore, because it is either we launch fast interceptor boats that are capable of attaining the speed of about 55 nauts – no vessel can beat that vessel out at sea – or we put our special forces on the aircraft and send them out to the target and capture the ship.

“This vessel is going to be a game changer based on its capabilities. We are looking forward to going into operations soon.”

He said there will be rigorous training for personnel, who will man the vessels, before going into full operation.

“The vessel is highly sophisticated and highly computerised. That is why there will be a rigorous training process before we launch into operation. The training will be overseen by experts with inept knowledge about the operations of the ship. There will be a lot of emphasis on training so that we can have sufficient competence to operate this craft the way we should,” Mohammed stated.

He added that the vessels were equipped with state-of-the-art intelligence gathering gadgets that could receive information and respond in the quickest time possible.

Dakuku said the National Assembly was very crucial in the Agency’s quest to reform the maritime industry.

He stated, “The National Assembly is our most critical partner in our quest to reposition the maritime sector because the success of any regulator depends on the enforcement of laws made by the legislators. We crave their continued support so that we can continue to deliver on our mandate to the Nigerian people.”

The highlight of the visit was the inspection of the two SMVs, DB Lagos and DB Abuja, which are currently anchored at Navy Town, Lagos.

Buhari Pledges to Abide by ECOWAS Decision on Border Closure