The Director General of the Nigerian Maritime Administration and Safety Agency (NIMASA), Dr. Dakuku Peterside has charged the media on fair and balance reportage of economic activities, noting that they play a vital role to the growth and development of the economy. 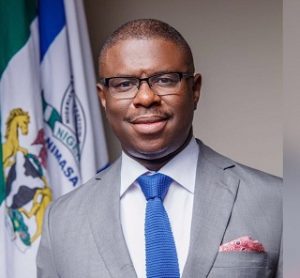 Peterside who stated this when the Management of Bond FM Lagos led by Engineer Bamidele Dada paid a courtesy visit to the Agency also enjoined them to use their medium to embark on an enlightenment campaign on the benefits accruable to the nation through a virile maritime industry.

“Lately, we are working on the possibility of rebranding NIMASA and part of the findings is that very few Nigerians understand the role we play as a regulatory Agency, and so we enjoin you to use your medium to educate Nigerians about the things we do in NIMASA.

By the little things we do, we contribute so much to the growth of the maritime industry and by extension, the economy of Nigeria where we are major players. Every day we are looking for avenues to ensure that more Nigerians get involved in the maritime industry”, Dr. Peterside stated.

While pledging support for the media, Dr. Peterside appealed to practitioners to always engage in constructive reportage of the maritime sector. In his words, “the media shapes peoples understanding of events; let’s not use the media for negative influence on the masses, let’s use the media to serve as the facilitator of economic re-engineering in our country.”

Earlier in his remarks, the leader of the delegation, Engineer Bamidele Dada lauded the rebranding initiatives of the Agency in repositioning the maritime industry for greater efficiency.

He also expressed willingness of Bond FM to partner the Agency on a major enlightenment campaign on maritime activities in making Nigeria a hub in Africa’s maritime industry.

It will be recalled that the DG in a New Year message to Stakeholders in the industry assured of a more robust and business friendly maritime environment in 2017 and beyond.