Alhaji Muneer Bankole, Medview, Chief Executive, made this known on Tuesday at the company’s listing of 9.75 billion shares by introduction at N1.50 per share on the Nigerian Stock Exchange (NSE) in Lagos.

Bankole said that the company was also targeting a profit before tax of N9.17 billion in the same period.

The company had posted a revenue of N25.85 billion for the 2016 financial year on a profit before tax of N949 million.

“Quality of service offered to customers is the key to business,” he said. 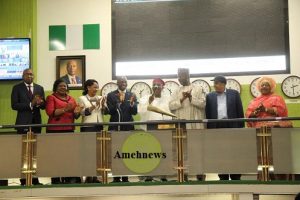 Bankole said that the company which commenced operations in 2007 had lifted over 46 million tons of cargo into the country, in partnership with a Saudi cargo airline.

He said that the firm was operating in about 19 approved international routes and was currently designated to 14 more new routes.

Bankole, however, decried the impact of foreign exchange instability in the business operations, especially on maintenance.

According to him, the company spends about two million dollars on maintenance of one aircraft outside the country.

“We do not have those items for maintenance in Nigeria and this is very sad. You have to buy dollar from many sides, very unfortunate, that is where the cash goes.

“We spent about two million dollars on each aircraft before bringing them back into the country.

“We are face with sharp increase in the price of dollar and aviation is dollar-denominated,” Bankole said.

He explained that the company decided to join the league of quoted companies on the exchange in order to enhance its corporate value and brand image of Medview.

Bankole said the company decided to list in order to have better access to long-term capital from a wide range of local and international investors.

Naira had remained stable over 2 weeks, US Dollar for N498 – Gwadabe