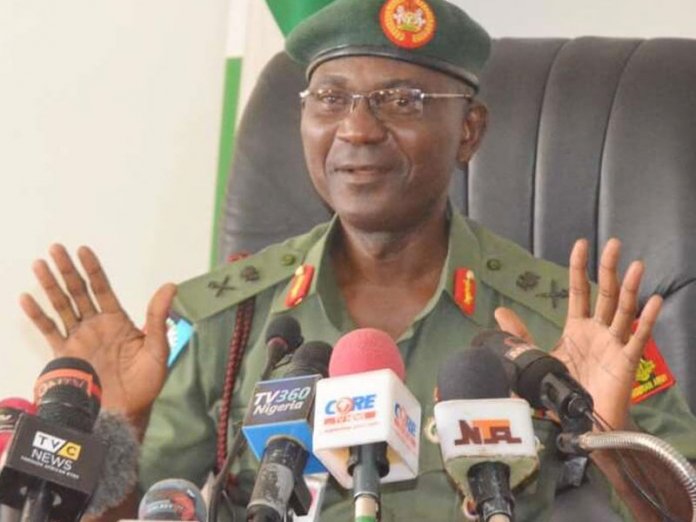 The Defence Headquarters yesterday appealed to Nigerians, especially those living in the North, the epicentre of Boko Haram insurgency, not to be discouraged by the recent killing of rice farmers in Borno State.

It also said the federal government would have the final say on whether or not to engage mercenaries to assist the military in defeating Boko Haram.

This is as the senator representing Kano Central Senatorial District, Senator Ibrahim Shekarau, has said President Muhammadu Buhari is breaking the law by keeping the service chiefs beyond their years of service.

The DHQ said soon, Boko Haram and its bloodletting will be over, adding that the resort to attacking soft targets by the terrorist group is a ploy to instill fear in the populace to remain relevant.
It also dismissed the claim by the terror group that it killed the farmers because they handed over one of their members to the military, noting that no Boko Haram member was handed to the troops.

Coordinator, Defence Media Operations, Maj. Gen. John Enenche, told reporters yesterday in Abuja that despite the recent killing of the farmers, the armed forces and other security agencies have continued their major operations across the country with dynamism.
According to him, in the North-west, troops of Operation Hadarin Daji and other subsidiary operations have sustained their operations progressively.

According to him, “The gallant troops within the period carried out a series of clearance operations, ambushes and aerial patrols. Notably, on 26 November 2020, troops of Operation ACCORD intercepted and arrested two suspected bandits named Ibrahim Umar and Ibrahim Sani. Preliminary investigation revealed that suspects have affiliation with bandit’s leader called Turji. The suspects are in custody for further investigations.

“Similarly, on November 27, 2020, troops, while on routine patrol, arrested two suspected bandits named Iro Ibrahim and Umaru Abdullahi from Daba village. “During preliminary investigation, a picture of Iro Ibrahim where he was holding two rifles was found on his phone. The suspects are in custody for further actions.

“Equally, the Air Component of Operation Hadarin Daji has sustained air operations against armed bandits with the obliteration of another camp and neutralisation of scores of their fighters at Birnin Kogo Forest in Katsina State. Airstrikes executed by the Air Component also resulted in the destruction of some structures at a camp in Dunya Forest in Katsina State,” he stated.
In the North-east, Enenche explained that land and air operations were conducted by the armed forces and other security agencies.

He said: “The gallant troops adopted sustained vigilance and offensive postures through a comprehensive ground and air operations. Within the period in focus, troops of Army Super Camp II Gamboru-Ngala conducted clearance operations at some suspected BHT/ISWAP criminals hideout at Garal village and Bulankesa village.
“The gallant troops made contact with the terrorists and effectively engaged and dominated them with rapid fire power. During the encounter, two BHT/ISWAP criminals were neutralised. “Relatedly, on 27 November 2020, troops of Strong Response Area Pulka conducted a robust clearance patrol at Ashigashiya area. During the operation, troops made contact with the criminals at their logistics base.

“In the ensuing gun battle, two terrorists were neutralised while others escaped with gunshot wounds. Several bags of assorted grains and other food items were recovered. Thereafter, the logistics warehouse was destroyed.”
In the North-central, he stated that “in continuation of intensive kinetic operations against armed bandits and other criminals in the North-central zone, troops of Operations Safe Haven, Whirl Stroke and other subsidiary operations conducted raids on identified criminals’ hideouts.

“Notably, within this period, troops of Operation Nutcracker II in conjunction with local vigilante members while on clearance operations engaged armed bandits at Dutse Magaji in Mariga Local Government Area of Niger State. During the Operation, three bandits were neutralised while one AK47 rifle and 38 rustled cattle were recovered”.
Also in the South-south, Enenche said: “Troops of Operation Delta Safe have sustained the fight against economic sabotage to secure critical oil infrastructure in the zone.

“Notably, on 26 November 2020, gunboats of Forward Operating Base Ibaka while on routine patrol around Mbo river, intercepted and arrested one large wooden boat laden with 229 drums of 300 litres of product suspected to be PMS with 2 suspects, outboard engines and pumping machines. Items and suspects are currently in custody to be handed over to the relevant security agency.

Eneche also said the decision to engage mercenaries to assist the military in defeating the Boko Haram insurgency is for the federal government to take.
He noted that the security forces cannot challenge the initiative, stressing that it is up to Nigerians and the government to hire the contract soldiers.
Following the killing of over 43 rice farmers in Zabarmari, Borno State, by Boko Haram insurgents last Saturday, Governor Babagana Zulum had demanded the engagement of foreign mercenaries to tackle the militants.

Endorsing Zulum’s demand, North-east governors had said the federal government should consider the suggestion.
But responding to a question, Enenche said the military had no business debating the proposal, adding that it is diligently prosecuting the war and focused on victory.
He said: “Request or proposal to engage mercenaries is at a very high level. The kind of armed forces and security agencies you have now are normally determined by the people.

”It (engagement of mercenaries) is not in our powers. It is a kind of force package; it is what the government wants. It is not for the military to begin to contend.
“No armed forces anywhere will tell the people, ‘this is how we want to operate.’ The legislators, National Security Council, will decide on it,” he added.

However, senator representing Kano Central senatorial district, Senator Ibrahim Shekarau, has said Buhari is breaking the law by keeping the service chiefs beyond their years of service.
There have been renewed calls for the president to remove the service chiefs amid the growing security challenges across the country.

Speaking on a live television programme yesterday, Shekarau said the service chiefs ought to go when they are 60 years of age or when they complete 35 years of service.

According to him, the service chiefs are public servants and should be treated like their counterparts in the service.
He said: “He (Buhari) is breaking the law. The law says if you are 60 you must go, it is so automatic. If you are 35 years of service, you must go. In fact, they are not staff of the president, they are the staff of the Federal Republic of Nigeria and there is a rule, it is just like in the civil service. If you are an ordinary civil servant and you hit 60 years, automatically you must go.
“The president hasn’t the right to extend beyond what the law says; that is the rule of law.”