Mavrodi Mondial Moneybox (MMM) in Nigeria, is back and open for ‘business’, 24 hours ahead of its advertised return date.

The notorious Ponzi scheme that created deep anxiety for its 3 million subscribers in Nigeria when it shut shop last December announced today on Twitter that it is back.

In a letter to its faithful, the promoters blamed the government and the Nigerian media for the hysteria around the scam and this time, they warned them to ‘leave us alone’ and ‘have mercy on people’.

The announcement of the return was made by its Faceless Support Group and was done with a long letter to members, that tried to placate them and encourage them to return to the fold.

“This is to officially inform you that MMM Nigeria is open for business a day earlier than promised! Let’s go there Nigerians!”, the tweet read. 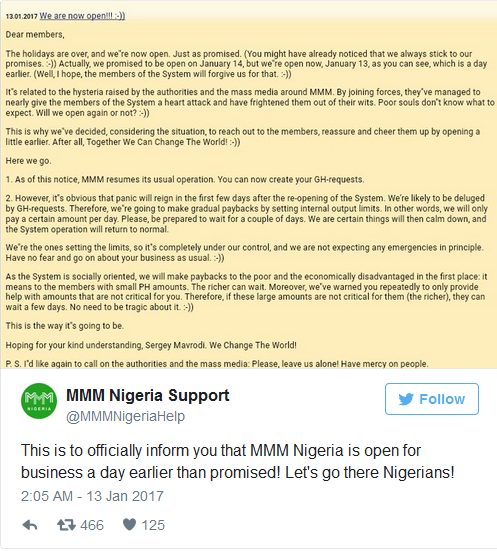 Hear is the letter published on the MMM website:
“Dear members,

“The holidays are over, and we”re now open. Just as promised. (You might have already noticed that we always stick to our promises. :-)) Actually, we promised to be open on January 14, but we”re open now, January 13, as you can see, which is a day earlier. (Well, I hope, the members of the System will forgive us for that. :-))

“It’s related to the hysteria raised by the authorities and the mass media around MMM. By joining forces, they”ve managed to nearly give the members of the System a heart attack and have frightened them out of their wits. Poor souls don”t know what to expect. Will we open again or not? :-))

“This is why we”ve decided, considering the situation, to reach out to the members, reassure and cheer them up by opening a little earlier. After all, Together We Can Change The World! :-))

“We’re the ones setting the limits, so it’s completely under our control, and we are not expecting any emergencies in principle. Have no fear and go on about your business as usual. :-))

“As the System is socially oriented, we will make paybacks to the poor and the economically disadvantaged in the first place: it means to the members with small PH amounts. The richer can wait. Moreover, we”ve warned you repeatedly to only provide help with amounts that are not critical for you. Therefore, if these large amounts are not critical for them (the richer), they can wait a few days. No need to be tragic about it. :-))

“This is the way it’s going to be.

“Hoping for your kind understanding, Sergey Mavrodi. We Change The World!

“P. S. I’d like again to call on the authorities and the mass media: Please, leave us alone! Have mercy on people.”