Mouka, Nigeria’s leading brand of mattresses and bedding products, has donated 200 mattresses to Ogun State Government for the enhancement of isolation centres used for the treatment of people infected with the coronavirus (COVID-19) pandemic. 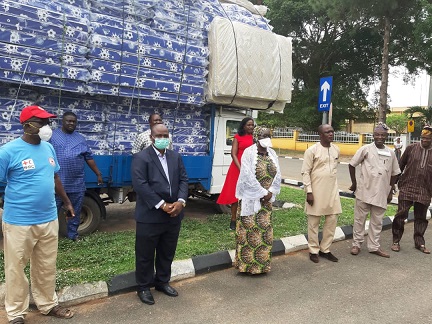 Other top governmental officials present during the donation were the Commissioner for Special Duties and Intergovernmental Affairs, Barr. Femi Ogunbanwo, and Commissioner for Health, Dr Tomi Coker. From Mouka was the Divisional Business Manager, Lagos / West, Ladi Alabi, who accompanied Osingunwa.

Commending the company’s timely intervention, the deputy governor said the donation came as a surprise and a move taken appropriately as the coronavirus spread is an issue of concern, not only in Ogun State but across the country, especially in states where confirmed cases have been recorded.

He affirmed that though the state has few cases, the government has taken pragmatic steps in tackling its spread and that Mouka’s goodwill would immensely boost the level of facilities at the isolation centres.

Eulogising the support of the frontline company, the Commissioner for Health avowed that health issues are paramount to the government and assured that the products would be effectively utilised for the wellbeing of the citizens.

Corroborating his views, Ogunbanwo said the government has not relented in its effort towards providing quality healthcare for the state and that the mattresses would be used to equip the COVID-19 isolation centres for the eradication of the pandemic which has decimated lives globally.

In his speech, Mouka’s Chief Commercial Officer mentioned that the socially responsible organisation lent its support during this period of national crisis as the wellbeing of Nigerians at the core of Mouka’s mission.

Osingunwa added that this necessitated earlier donation of 700 mattresses to Lagos State Government on Monday for COVID-19 isolation centres and to victims of Abule Ado gas pipeline explosion which occurred in the state recently.

Mouka has also joined the Federal and State Governments in appealing to citizens in the country to adhere to measures at combating the spread of COVID-19.

As far back as early February 2020, Mouka had begun raising awareness for Corona Virus prevention on its social media platforms. The company advises citizens to wash their hands regularly, stay at home, and keep to social distancing guidelines when in public, among others.

The company manufactures quality brands such as Wellbeing orthopaedic mattresses, Dreamtime water-resistant mattress and Mondeo Spring mattress. Other products on its stables include Mouka Mozzi, an innovative brand of insect repellent products and wide range of pillows for a comfortable sleep.

COVID-19:  Islamic Forum of Nigeria calls on Federal Government as a matter of urgency, fulfill its promise